Pebble Beach, California (June 18, 2010)–Day two saw Phil Mickelson, a student of Las Vegas' Butch Harmon, rocket 64 places up the leaderboard and into second place. He went 5-under par in his round. He had fans in the stands and on the actual Pebble Beach, looking up at the world's best golfer. Also, a few golfers with strong ties to Las Vegas golf courses survived another tough day and made the cut. Craig Barlow fell 19 spots but finished at +6 and will play the weekend. Alex Cejka is at even par and in a tie for 6th. Nick Watney jumped 53 spots and finished +5. Ryan Moore is at +6. The cut was +7 so Kevin Na (+14) and Adam Scott (+8) will have the weekend off. Read on for more news and photos, live from the Open. —By Brian Hurlburt, Photos courtesy USGA.

As usual, Harmon is the man in the catbird seat at a major. Three of the pros Harmon works with are among the top five on the leaderboard. Besides Mickelson, Harmon works with Dustin Johnson and also helps Ernie Els, although that relationship is said to be a bit more casual. But Harmon made the trip to Pebble, and spent time with Johnson and also with Watney, among the other pros. Johnson has won the last two AT&T PGA Tour events played at Pebble, and feels comfortable on the course, but also says there aren't a lot of similarities with the setup. 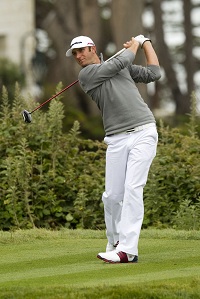 "There's a lot of difference," said Johnson following his second-round 70. "You hit driver a lot more in February. The ball doesn't roll at all. So then coming into greens every club you hit spins back. So it's a lot different with the ball bouncing a lot. … But it's still the same golf course. You just have to pick out your spots where you want to land it. It's the same as the AT&T. The ball's coming backwards then instead of going forward. So you still have to have good spots to land the ball, and you have to have good lines off the tee.  … Whenever you have success at a golf course you get a lot of confidence. So I've got a lot of confidence at this golf course, and it sets up very well for me." Johnson is in a tie for second, and says he and Harmon have been working on a specific shot this week. "The biggest thing we were working on is cutting it," said Johnson. "I hit a lot of cut shots this week. And I'm hitting them very well. So it's definitely helped out."

Harmon operates the Butch Harmon School of Golf at Las Vegas' Rio Secco Golf Club, one of two Rees Jones-designed Las Vegas golf courses. The School is open to anyone, but is a haven for the world's best players, including the three mentioned in this article. But Harmon also works with Watney and Natalie Gulbis, among others. Click now to view the official website of the Harmon School and learn how you can visit and learn what the pros do. Also, you can click to the official Rio Secco Golf Club website to make your Las Vegas golf tee times at this resort course. Rio Secco is the home of the Wendy's 3-Tour Challenge. 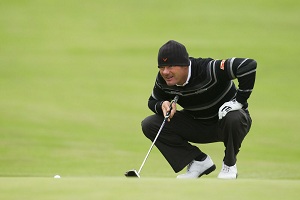 Cejka, who lives in Las Vegas and plays and practices at TPC Las Vegas and TPC Summerlin, made a style statement with his headgear during the second round. He wore a winter cap, but said it was only for comfort, not style points. "It's for warmth," said Cejka. "It was pretty chilly this morning until about the first nine holes. And then I just kept it on. But it was, compared to yesterday, much colder." Cejka is just one of many Las Vegas tour pros to play out of the resort TPC Las Vegas, a PGA Tour-owned resort Las Vegas golf course. You can click now for the official website of TPC Las Vegas.

Mickelson, who was very frustrated after round one, is now ready to go on the weekend. "I'm in a good spot," said Mickelson. "I don't look at the leaderboard, I don't look at other players. I look at par. And this is the only tournament really in professional golf to date that brings out Bobby Jones' old saying of 'Playing against Old Man Par' because if you just can stay around par you're going to be in the tournament on Sunday, and that's kind of the goal. I was 4-over yesterday and I got it back to even, actually got it to under par, but it doesn't matter who is up on the leaderboard or what's going on, somewhere around par is always going to be in it." Mickelson doffed his cap to a crowd gathered on the beach looking up at him on the 9th hole. In the sand were the words 'Go Phil', written in seawood. The moment was captured on national television, and this writer was taking a quick break (with my son and nephew) from the official action and was a part of the cool moment when Mickelson rewarded the fans who created the message. 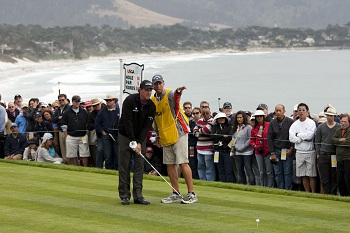 In other news for Las Vegas golfers, Barlow had another tough finish, firing a 41 on the back nine to plummet down the leaderboard. He went three-over par on his final three holes in round one. But his total was good enough for him to make his 5th cut in five tries on the PGA Tour in 2010. Watney, who is a Las Vegas resident as is Barlow, fared much better in round two. He says he and Butch continue to work on the fundamentals as they always have. Moore was a 4-time All-American at UNLV and lived in Las Vegas for a year or two after he left UNLV, but now splits time in Scottsdale and near Seattle. Na is a Las Vegas resident while Scott played for one year at UNLV.