June 21, 2010–US Open Pebble Beach 2010 is in the books, and the result shows a Euro winning the US Open for the first time in 40 years, and an American collapsing in stunning fashion, plus some Las Vegas golfers playing the weekend. Graeme McDowell, from Northern Ireland, survived a tough final round to win while Dustin Johnson, who works with Las Vegas' Butch Harmon, fired a stunning 82 on Sunday. That horrible round was given fuel when Johnson found the brutal rough surrounding a bunker on the second hole. A few Las Vegas golfers, led by resident Alex Cejka, survived the cut.–By Brian Hurlburt, photos courtesy USGA.

"The U.S. Open has always been a tournament, you know, if people asked me which Major did I feel like my game is most suited to, I normally said the U.S. Open because I've always been pretty good off the tee, accuracy-wise," said McDowell who was the one who survived the best on Sunday. "I've never really been the longest hitter in the world. But I certainly put a bit of yardage on the last year. …I thought I executed my game plan really well every day, stayed patient most days. Thursday was probably my most impatient day. I felt like I felt a little frustrated out there. I promised myself I was going to stay calm and be tough over the weekend. I was proud of myself the way I stayed calm today. To win at Pebble Beach, to join the names, Jack Nicklaus, Tom Watson, Tom Kite, Tiger Woods, me (laughter) wow. I'm not quite sure if I belong in that list, but, hey, I'm there now. It's a pretty amazing feeling. This is — I'd take a Major championship anywhere on the planet, I didn't really care." 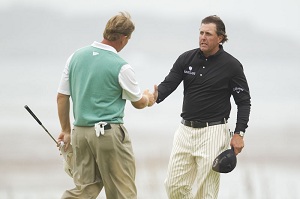 But the major story of this Open could be that at least three big names, Tiger Woods, Phil Mickelson and Ernie Els, never mounted charges in the final round despite the leaders falling back, none more quickly than Johnson, who went triple, double on holes two and three. But as we mentioned early in the week, those who lucked out and survived the thick and tall native grass that surrounded the bunkers would probably rise to the top of the leaderboard. Johnson was lucky the first three rounds, but then on the second hole of the final round, his approach shot ended up in the rough and not the sand. He attempted an awkward left-hand shot rather than take a drop due to an unplayable lie. Five shots later he had a triple bogey, was tied for the lead and after a double on the third hole, his chances of winning were slim. Johnson's collapse had minimal effect on McDowell, who played in the same group with him on Saturday and Sunday. 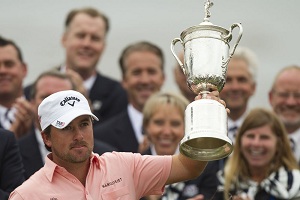 "It's always difficult to watch a guy do what he did," said McDowell. "To watch him make triple on 2 and go through what he went through on 3, I felt sorry for him because we've all been there. We've all experienced that. It's not a lot of fun. I said yesterday that if the Dustin Johnson that played on Saturday showed up today he was going to be tough to handle. And I felt sorry for him the way he started. Like I said, we've all been there. The delay, it didn't really bother me too much. It gave me a little chance to collect my thoughts a little bit and really kind of calm myself down. I ended up nearly making a mess of the two-putt. I left it quite short. Managed to really make a nice 6-footer there. He was a real gentleman after that. Many guys would kind of go into their own — inside themselves and kind of be upset and be tough to play with, maybe. But I really enjoyed playing with him the last couple of days. He's a real top sportsman and a great, talented player. And playing with him certainly helped relax me the last couple of days. He handled himself really well, I thought." 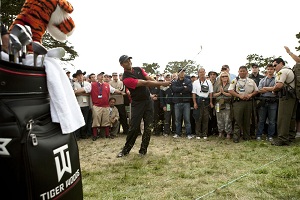 Woods, who started the day at 1-under par, never could replicate much of his 66 from Saturday. "It's disappointing because I started off so poorly again and left myself above the hole," said Woods, who finished in a tie for 4th with Mickelson. "Every putt I missed was from above the hole. Yesterday I made everything because it was all below the the hole. These greens are bumpy enough where putts above the holes it's just pot luck. But below the hole it takes a lot of that break out, and the putts I had today that were below the hole I made them."

Mickelson had some terrific early chances to get under par, but couldn't capitalize on any of them. He could have easily been two or three-under par very early in his round, but it wasn't to be. "I thought that the first six or seven holes were good opportunities to make some birdies," said Mickelson. "The pins were in the right spots. … I had opportunities. I had a 15 foot eagle putt on 4. And I make par. That was frustrating. I have a 5-iron into 6, and I make par. That was frustrating. But at the turn, I was still under for my round. Even par for the tournament, which was ultimately the winning score. All I had to do was shoot even par in the back, and I'm in a playoff. I wasn't able to do it, obviously, it was tough."

Cejka, who is a Las Vegas resident who plays and practices at TPC Las Vegas, had a solid week. He fired a 73 on Sunday and finished in a tie for 8th, the best finish for golfers with strong ties to Las Vegas golf courses. “I’m pretty happy the way I hit the ball," said Cejka. "My putting was not sharp, but it’s tough on these greens. I had a lot of chances. I’m overall happy with the performance. I could be two, three shots better, but that’s the way it is. But overall, I’m pleased."

There are more than 30 tour pros with strong ties to Las Vegas golf courses, and also there are many world class golf courses in the Las Vegas Golf Region. One of those golf courses is Wolf Creek Golf Club, which is located in Mesquite, 77 miles north of Las Vegas but worth the drive. Wolf Creek is annually included on the "Best of" lists of major golf publications. Currently, you can play Wolf Creek and sister Mesquite golf course Falcon Ridge for just $55 through the summer. Click now for the official website of Wolf Creek to view this Las Vegas golf deal.

Other Las Vegas golfers who made the cut included John Mallinger, who is originally from Southern California but now has a home in Las Vegas, had a solid week. He finished in a tie for 22nd. Ryan Moore, the 2004 NCAA champion while at UNLV, finished in a tie for 33rd. Residents Nick Watney finished 76th and Craig Barlow in 77th. Resident Kevin Na and former UNLV golfer Adam Scott missed the cut.