Las Vegas, Nevada (July 6, 2010)–Yep, the PGA Tour has a tournament this week, the AT&T National, and it's no surprise that there are several PGA Tour golfers with strong ties to Las Vegas golf courses near the top of the leaderboard. It seems that not a week goes by without a Las Vegas guy challenging for a title. Last week it was Chris Riley, a part-time resident and former UNLV All-American, who finished one shot off the pace at the Travelers Championship. After the first round this week, Las Vegas resident Nick Watney is tied for the lead, and former 4-time UNLV All-American Ryan Moore and John Mallinger, who is said to have a home here, are one shot back. When all was said and done, Moore finished second while Watney ended T7 and Mallinger T16. LIVE SCORING.–By Brian Hurlburt.

"The golf course is perfect out there, and I played very, very steady," said Watney. I was never really in much trouble, (I hit) a lot of fairways, a lot of greens, a lot of opportunities, so definitely very pleased and looking forward to the rest of the week." Watney has lived in the Las Vegas area for several years and works with Las Vegas resident Butch Harmon, who operates his school at Las Vegas golf course Rio Secco Golf Club. Click now to view the official website of the Butch Harmon School of Golf, where all golfers are welcome, not just the tour pros.

There are more than 30 pros who play the biggest tours who have strong ties to Las Vegas golf courses. Other Las Vegas golfers doing well at the AT&T following the first round are residents Charley Hoffman (T19) and Rickie Fowler (T19), along with Riley (T35), who is looking for another strong finish. There are also many great Las Vegas golf courses including Rio Secco, a resort course open to all. Also at Rio Secco are the T-Mates, beautiful female caddies. Click now to view the T-Mates and the official website of Rio Secco Golf Club where you can reserve your Las Vegas golf tee times or Las Vegas golf packages.  Hoffman ended T41 while Riley and Fowler missed the cut. 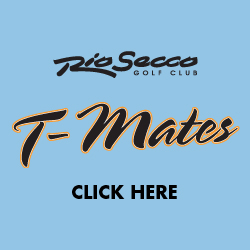 The AT&T is being played for the first time at Aronimink Country Club near Philadelphia. The classic course is a Donald Ross design. "I'm definitely not complaining," said Moore about his round and the course. "It's a great golf course, but it's straightforward, and if you hit good shots, you get rewarded with good spots, and I fortunately kept it on the correct side of the hole quite a few times and actually had some good opportunities on the second nine." Moore entered the event 53rd in the FedEx Cup points list, but if he finishes where he is now, he is projected to jump up to 45th.

Tiger Woods, who entered the week as the favorite in the Las Vegas golf betting odds, was back raising money for his Foundation, which also operates this event. Before the scandal, Las Vegas was the host city for Tiger Jam, a major fundraiser for the foundation. Woods was at a dinner with Jon Bon Jovi on Wednesday night where a lot of money was raised for the cause. "It's been incredible," said Woods when asked about how he has been received by the crowds in Philly. "For us to come here for the first time and the people to be as warm and open as they have been, so affectionate and receptive to what we're trying to do for kids, it's been — we couldn't ask for a better reception. Last night was just incredible. Jon played great, as always. It was pretty neat to see him play acoustically. We don't get a chance to see that very often. You start realizing how talented he really is." Tiger shot 3-over par and was seven shots out of the lead after one round.