Las Vegas, Nevada (July 9, 2010)–World Golf Hall-of-Famer Jack Nicklaus has made an indelible impression on golf in Las Vegas. He's won a handful of PGA Tour tournaments played in Las Vegas and designed a handful of Las Vegas golf courses, including Bear's Best Las Vegas and The Chase at Coyote Springs. But now Nicklaus, along with The First Tee and RBS, has made a lasting impression on the life of a Las Vegas junior golfer. Deloise Daniels, a standout of The First Tee of Southern Nevada, accepted a national award from Nicklaus this week.–By Brian Hurlburt.

Nicklaus, a national spokesperson for The First Tee, awarded Daniels a $10,000 scholarship from RBS to help fund her post-secondary education. The ceremony took place at the Heinz Center in Pittsburgh, PA, and was hosted by Golf Digest and Golf World magazines. "These young men and women are wonderful examples of how the game of golf can positively impact lives and how The First Tee has become an ideal vehicle to use the game to teach valuable, character-building life lessons," Nicklaus said. "This is why we hope The First Tee continues to broaden its global reach, so we can show emerging markets around the world that we are producing good citizens and not just good golfers. RBS has recognized this and we appreciate their support of The First Tee and the lasting influence they have had and will continue to have on these participants."

Currently, The First Tee of Southern Nevada, in conjunction with TPC Summerlin, the host course for the PGA Tour's Justin Timberlake Shriners Hospitals for Children Open, are offering a Las Vegas golf deal you can't refuse. On Monday, July 19, you can play this private course for just $100 and experience the course where the pros play. All proceeds benefit The First Tee of Southern Nevada. Click now for more details about this First Tee VIP day. Or you can call 702.343.1890 to reserve your Las Vegas golf tee times for this opportunity. 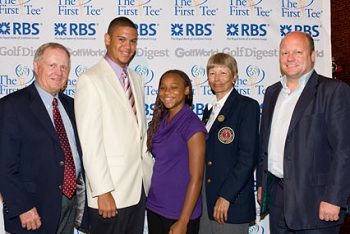 The ceremony was held in conjunction with the U.S. Women's Open being played at Oakmont Country Club. Daniels and the other award winners (there were 10 finalists with only two Achievers of the Year chosen) also attended the Open as guests of The First Tee and RBS. The following is the Daniels bio from the official website of the award: "Deloise Daniels, 16, attends Northwest Career and Technical Academy and is a six-year participant of The First Tee of Southern Nevada. Deloise’s parents divorced when she was four-years-old and consequently she traveled between Las Vegas and Reno to spend time with both parents. After some time her mother’s health began to deteriorate and Deloise took on the responsibility of caring for both her mother and younger brother. In November 2002, her mother passed away and she and her brother moved to Las Vegas to be with her father and grandparents.This transition took a toll on Deloise emotionally, though she hid her feelings to appear strong for her brother. It was at The First Tee of Southern Nevada that she found a sense of comfort from the staff and other participants, and learned how to manage her emotions. Today, she channels her energy toward golf, education and her everyday life. She believes 'all things happen for a reason' and dreams of attending college." Locally, The First Tee of Southern Nevada is operated by a solid and dedicate staff and volunteers.