Las Vegas, Nevada (July 16, 2010)–Angel Park Golf Club is billed as the world's most complete golf experience because there are two 18-hole, Arnold Palmer golf courses, a lighted par 3, real-grass putting course, and a large practice area, plus other Las Vegas golf amenities. And over the years, this Las Vegas resort course has become the home for one of the bigger Las Vegas golf events on the schedule, the Cleveland Golf Pro-Scratch. This year, two golfers from Las Vegas, pro Jonathan Taruc and amateur Michael Wynn, fired rounds of 63-63–126 to earn the victory.–By Brian Hurlburt.

“I swear Michael is the best amateur in Las Vegas,” said Taruc. “But we both played great each round. We made seven birdies the first day and eight birdies the second day without a bogey on either day. We knew things were going well when I missed the green on the 447 yard, 1st hole (their 16th hole of the day) … but then I took out my Cleveland wedge and chipped in for birdie to keep our momentum going."

The 2010 Cleveland Golf Pro-Scratch is a two-person better ball with each team comprised of one professional and one “scratch” amateur competing for a total prize purse of more than $17,000. The event draws teams of golf professionals and amateurs from all over the country as teams travel from California, Arizona, Washington and as far away as Hawaii and Florida to compete. Notable local pros such as Robert Gamez, Jeremy Anderson and Ed Fryatt have also played in the past. Taruc earned $1450 in cash while Wynn earned the maximum $750 in gift certificates.

"We were pleased to once again support this great event,” said Tim Shaver, Territory Manager f.or Cleveland Golf Srixon "It is one we look forward to every year and has turned into one of the most popular two-player events in Southern Nevada.”  The event title sponsor is Cleveland Golf Srixon. For more information on Cleveland Golf or Srixon visit www.clevelandgolf.com or www.srixon.com . Among the PGA Tour players who are on the Cleveland Golf are Vijay Singh, Boo Weekly, and David Toms. 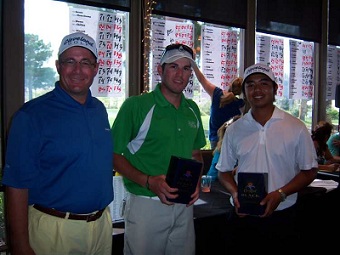 “Congratulations to Jon and Michael and thank you to Angel Park’s tournament staff for putting on another outstanding event.” said Phil Green, President of OB Sports Golf Management. “The event certainly wouldn’t be the event it is without such great support from our sponsors including Cleveland Golf Srixon, Club Car, The Bellagio, Grey Goose, and Southern Wine and Spirits. Thank you to all for your continued support and partnership.” OB Sports owns and operates Angel Park Golf Club, and the successful VegasGolfCentral.com, where you can learn about other OB Sports Las Vegas golf courses and make official Las Vegas golf tee times.

Jake Ellison and John Busby finished one shot off the pace while Jimmy Gunn and Lance Thompson were third. Former PGA Tour champion Ernie Gonzales and amateur Lance Bural opened with a 63 and were tied for the lead, but shot 69 in the second round to finish in a tie for 6th. Gonzales learned just prior to the tournament that he had earned a spot in the PGA Tour's Reno-Tahoe Open being played this weekend. Gonzales won the 1986 Pensacola Open on the PGA Tour and still has the ability to get in events due to the victory. He also finished in a tie for 47th in Las Vegas' PGA Tour event, the Justin Timberlake Shriners Hospitals for Children Open, and that paycheck helped improve his "former champion" exempt status. Former Nationwide Tour champion Vic Wilk also played in the 2010 event, finishing in a tie for 23rd, while carrying this Las Vegas golf writer around the course.