Las Vegas, Nevada (September, 22, 2010)—When it comes to honors, there are several that stand out as major accomplishments that anyone would be proud of such as Most Valuable Player and All-American. Those are certainly impressive honors but they usually signify a body of work that encompasses one year or season. When that body of works spans decades of selflessly sacrificing their time and effort, there’s only one honor that is fitting—Hall of Famer. Charlie Baron and Joe Kelly have spent countless hours tirelessly promoting golf in Las Vegas and have earned them a spot in the 2010 Las Vegas Golf Hall of Fame class along with the original Tournament of Champions event. Here’s a closer look at the Las Vegas Golf Hall of Fame’s class of 2010 that will be inducted on Oct. 19 at the Palms Hotel’s Pearl Theater from the official press release issued by the organization. —By Bill Bowman. 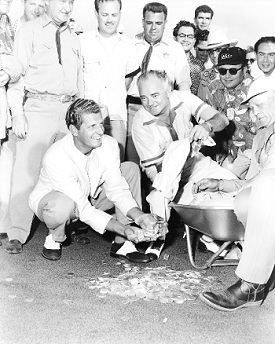 Charlie Baron spent more than 22 years as the driving force behind the PGA Tour’s annual stop in Las Vegas as the tournament director. In that time, he helped the Las Vegas Founders raise millions of dollars for local charities that also helped boost the Las Vegas economy. Some of the PGA Tour’s biggest stars, including the likes of Tiger Woods, Phil Mickelson, Jim Furyk and many others, have roamed the fairways and picked up the winner’s trophy. A couple of memories really stand out for Baron—Chip Beck’s record-setting 59 in 1991 at Sunrise Country Club and Tiger Woods’ first PGA Tour victory, coming in 1996. Baron also helped run many men’s and women’s college tournaments and was also involved in AJGA golf tournaments held around the Las Vegas valley. “I am honored to be recognized as part of the golf history in Las Vegas,” Baron said. “I had the pleasure of working with many Las Vegans during my 22 years in the community and we accomplished many goals over the years that benefitted numerous organizations.

Joe Kelly’s time heping the Vegas golf scene has been spent outside of the limelight. He’s been a resident of Las Vegas for more than 30 years and during that time, he has lent his considerable talents to many local golf courses including Dessert Inn Country Club, Las Vegas Country Club, Desert Pines, Sunrise Country Club, Stallion Mountain, Royal Links, Bali Hai and most recently, Golf Summerlin’s three courses—Palm Valley, Highland Falls and Eagle Crest. Kelly has also spent much of his free time helping better the golf community. He is a Founding Father of the Southern Nevada Junior Golf Association, sits on the boards of the First Tee of Southern Nevada and the Las Vegas Golf Hall of Fame. Kelly has received many decorations, awards and acknowledgements through the years including Las Vegas Chapter Golf Professional of the Year in 1983, 1989 and 2009. “As a PGA Club Professional it is probably the highest honor that can be bestowed upon you,” Kelly said. “To be recognized by the Las Vegas golfing community is very special. It is a great honor for me and also my family.”

The original Tournament of Champions (now the SBS Championship and played in Maui each January) was played in Las Vegas in 1953. Champions of the event when it was held in Las Vegas include Jack Nicklaus, Arnold Palmer, Gene Littler and many other golf greats. “The Tournament of Champions was the pre-eminent Las Vegas and Nevada event for many years, bringing the eyes of the world to Las Vegas, right from the beginning when it debuted in 1953,” said Jack Sheehan, Las Vegas golf author, historian and 2009 Las Vegas Golf Hall of Fame inductee. “The event drew the biggest names in golf and biggest Hollywood stars to Las Vegas, and was created by Las Vegas' movers and shakers including Moe Dalitz, Irwin Molasky, Howard Capps, Merv Adelson, Wilbur Clarke, and Allard Roen, among others. To this day, the event is played on the PGA Tour, but its roots date back to 1953 when Al Besselink collected his $10,000 first prize in a wheelbarrow full of silver dollars.”