Las Vegas, Nevada (September 29, 2010)–Sometimes the world can be a bit skeptical about things. One such thing could be the opinion of those not in the know about when a sports star 'moves' to the Las Vegas area. Sometimes a person's first thought is: "He is moving here just to save on taxes and won't live here much." Maybe that's the case at times, but that appears to not be the case for Ryder Cup and PGA Tour rookie Rickie Fowler, who moved to the Las Vegas Golf Region prior to Las Vegas' 2009 PGA Tour tournament, the Justin Timberlake Shriners Hospitals For Children Open. Fowler spends plenty of time here. LIVE RYDER CUP. —By Brian Hurlburt.

"Whenever he's in town, he's here," says Chuck Bombard, General Manager of the PGA Tour-owned and private Las Vegas golf course TPC Summerlin. "He'll eat breakfast here, spend 4-5 hours on the practice tee and putting green, and then play. He really works hard at his game. He says hello to everybody, and he has been a welcome addition to the club. He fits in well, and everybody is real proud of him. They also know him over at our neighborhood Starbucks, where he stops in quite often." TPC Summerlin is the host course for the Timberlake tournament, and is minutes away from Fowler's Las Vegas pad. Fowler was a captain's pick of Corey Pavin and makes his Ryder Cup debut this week.

"It's been great," Fowler said earlier this year about living in Las Vegas. " … There are a lot of good guys there. I am really enjoying spending time out there at TPC Summerlin. You know, looking forward to having a few weeks off at times, being able to hang out and spend time there. There's a lot of great guys that are around, a good group that hang out at TPC Summerlin: Hoffman, Mallinger, Piercy, Lundy. There's a lot of good guys." Through the FedEx Cup playoffs, Fowler had earned more than $2.3 million, and finished 32nd in the standings. He had two runner-up finishes and five top 10s. In 2009, Fowler received a sponsor's exemption into the Las Vegas tournament, but this year he is qualified to get into the tournament on his own. There is no official word, but he is expected to play again in 2010. 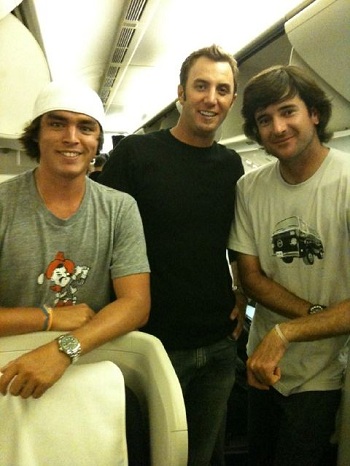 Fowler was somewhat of a controversial choice by Pavin, but the captain is confident in Fowler and the other rookies on the team. "I like these rookies," Pavin told the media. "They are aggressive, positive players. You know, it's kind of the different breed than I was — back in the old days when I was playing. These guys are aggressive, positive, and they are going to come out firing. There's not really much to tell them. I think I just want to make sure that they are emotionally under control and I watched some of them today, and they seemed quite fine out there, very relaxed." A couple weeks ago on the day of the announcement, Pavin also said the following about Fowler, specifically. " I think obviously he's deserving. There's a lot of guys deserving to be on the team. Like I said, there was a lot of people in the mix. I've said that before, and it's absolutely true … It just came down to feelings. I had a gut feeling about Rickie. He has a good Walker Cup record, 7-1. He's a very good player. There's a lot of very good players that I had to look at, but that's the way I went."

Fowler is thrilled to be on the team, and ready to go, tweeting recently, "IT'S GO TIME!!! GO USA!!!" Folwer also said via conference call recently that he is ready to bring some energy to the team, as another rookie did in 2008. "I thought Anthony Kim did a great job of that the last Ryder Cup, but I do think I could bring some energy and that's one thing I would like to do, is help out the team," said Fowler. "Obviously playing well, stuff like that, but keeping the guys fired up and keeping that main goal in mind." Click now for Fowler's official Twitter page and photos from the Ryder Cup experience.