Las Vegas, Nevada (October 24, 2010; UPDATED 10/27)–As is always the case, Las Vegas' PGA Tour event, the Justin Timberlake Shriners Hospitals for Children Open, went down to the wire. But this year it took several 'wires' to decide a champ. But on the fourth playoff hole, Jonathan Byrd knocked in his tee shot on the par 3, 17th hole to win the tournament. It was the second ace of the day on the hole, and arguably the shot of the year on the PGA Tour. "I'm in shock," is all Byrd could say in the moments following his magical 6-iron. It was the first time in the history of the PGA Tour that an event was won by a player recording a hole-in-one on the final hole and final swing. Final Results. —By Brian Hurlburt.

With darkness setting in and the golfers mutually agreeing to play just one more hole, Byrd stepped to the tee at TPC Summerlin quickly and hit his Titleist into the dark sky, but wasn't sure the ball found the bottom of the cup until Laird and Percy both came up to congratulate him. The three had ended regulation tied at -21. The 17th hole proved to be the deciding hole in several ways because Byrd birdied it in regulation to get to -21 and Wedd Simpson made double bogey on the hole, dropping from -22 (and in the lead) to -20 and looking up to the leaders. "I take away a lot. I think I proved today to myself and everyone else that I can do it," Simpson said while the others were preparing for a playoff. "I made a lot of good birdies and good swings and good putts there on the back nine, which is what I needed to do. You know, I'll sit down and really analyze what I was thinking and feeling on 17 to learn from it, but all in all, I'm pleased."

In 2009, Laird won the event in a playoff, but his luck ran out in 2010. He had three-straight putts to win the tournament on the first three playoff holes, but none of them found the bottom of the cup. Each of the putts were difficult, but a couple had chances to go in the hole. The three played the 17th and 18th holes twice in the playoff. Moments before his hole-in-one, Byrd hit a long birdie putt that singed the edge of the hole but didn't drop, allowing the playoff to continue back to 18 and then ultimately on to 17. And that was when history was made, minutes after the group and the PGA Tour decided to play on despite growing darkness. 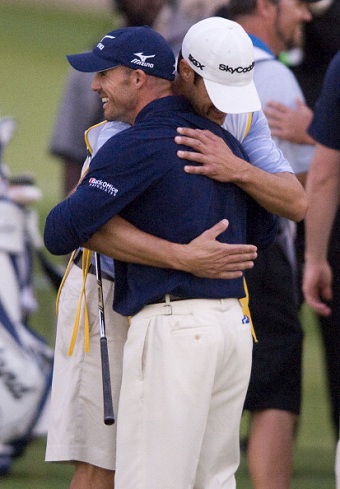 "We're sitting there on 18 green trying to decide whether we're going to keep playing or not, and I wanted to — I felt like we could get one more hole in on 17, and the other guys did, too," said Byrd following the win and the trophy presentation with Justin Timberlake, the celebrity host. "We decided just one more hole, and if we get to the green and it's too dark, we'll stop. So I'm up first, and I've played that hole well in regulation and in the playoff, hit good shots, and just went through my same process, and for me it was put a 6-iron kind of back in my stance and try to play more of kind of a sweeping draw into that left pin and curve it over to it. It started perfect, it turned perfect, and it was coming right down the flag. I thought I hit it too good. I thought I hit it too far, and I couldn't see anything. But to hear the reaction as it went in, I was just in shock. I was trying to be considerate of my playing partners because two more guys had a chance to keep playing, and I didn't want to overreact. I'm numb, pretty much."

A couple days following the dramatic win, the PGA Tour organized a media call with Byrd, who was still amazed at the way things played out on Sunday in Las Vegas. "Obviously, I was kind of in a daze and confused when it happened, because I didn't see it go in and then didn't know really how to react to it," Byrd recalled via conference call. "I'm still kind of dazed and confused now taking a red eye home and reuniting with my family and just kind of taking it all in. It's been a difficult year, a good year because I haven't played as well, and I've learned a lot. But then to kind of play well in the fall and win this week, it's just a lot of emotions going on. I just feel very blessed at the moment." Photos: Getty Images.