Las Vegas, Nevada (November 1, 2010)–Under Armour is arguably the world's toughest brand of sports apparel and other equipment. The line is in your face and in just a few short years has rocketed to among the leaders in the global landscape of sports marketing. And recently the leaders of Under Armour picked Las Vegas Golf Region course Wolf Creek Golf Club to be the backdrop to a marketing hype video featuring PGA Tour golfers Hunter Mahan, Michael Sim, Steve Marino, and LPGA Tour golfer Vicky Hurst, to promote the UA golf line. No doubt it was an appropriate pairing. –By Brian Hurlburt.

Wolf Creek Golf Club has been likened to playing "Fantasy golf in real life", "Playing golf on the moon", and "Like Shadow Creek meets Mr. Toad's Wild Ride" so it is no stretch that the masterminds of Under Armour Golf picked the course as the back drop for a golf brand that is high energy and in-your-face. The course is prominently featured in the video, with each of the pros taking swings to the majestic holes at Wolf Creek, a Las Vegas Golf Region course located in the Mesquite, Nevada, about 77 miles north of the Las Vegas Strip. Click now to view the video at the official Wolf Creek Facebook page.

"We were originally contacted about a year ago, and it was clear that they were very intrigued with having a video shoot at Wolf Creek because of our water features and the dramatic vertical features that are a natural here," says Wolf Creek General Manager Joel Villanos. "Under Armour, as a brand, represents a rugged outdoor feel, and they believed our course showcased that perfectly." Villanos also says that plans originally called for a simple shoot, but when all was said and done, all four golfers, agents, videographers and photographers had all descended upon Wolf Creek, and an entire year's worth of work was completed. The course had, again, lived up to the hype.

Under Armour is attacking the golf apparel as it did the general sports apparel and performance industry. The brand is being aligned with the best junior golfers in the America via a large sponsorship of the Junior PGA Championships in addition to 41 satellite events annually. Both Mahan and Hurst are former junior PGA champions, and former Las Vegas resident Inbee Park also is a past champ. "The PGA of America is very proud that Under Armour is partnering with us to support one of our premier Championships, the Junior PGA Championship," said PGA of America President Jim Remy about the agreement that debuted at the 2010 event in August. "Under Armour is a sports industry leader in both quality products and service, and will add even more prestige to a Championship that for more than three decades has attracted the finest junior golfers from our 41 PGA Sections and around the world." Acfording to official company information, Under Armour is "a leading developer, marketer, and distributor of branded performance apparel, footwear, and accessories. The brand's moisture-wicking synthetic fabrications are engineered in many different designs and styles for wear in nearly every climate to provide a performance alternative to traditional natural fiber products." Click to view Under Armour Golf. 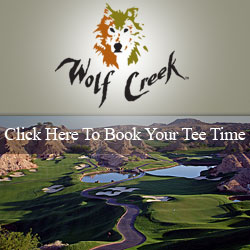 Wolf Creek can also be called a leader in the golf course industry because annually the course is included on the "Best of" lists by the top golf publications. And over the years Wolf Creek has been positioned as a must play. Other top brands have also reached out to partner with the Wolf Creek brand including EA Sports. The company included the course as the "fantasy option" in the past several EA Sports Tiger Woods games, and people from all over the world who play the electronic version travel to Wolf Creek to experience the real deal, nearly all leaving with jaws dropped that the real Wolf Creek actually surpassed the video version.