Las Vegas, Nevada (November 9, 2010)–Some of the world's best golfers have been in the Las Vegas Golf Region over the last couple days, including Cristie Kerr, the world's 3rd-ranked LPGA Tour player in the Rolex Rankings, and Bernhard Langer, who recently won the Charles Schwab Cup on the Champions Tour. The two are competing in the annual Wendy's 3-Tour Challenge at Las Vegas golf course Rio Secco Golf Club, but were also part of a skills session taped for The Golf Channel's The Golf Fix on Monday. But it was PGA Tour bombers Bubba Watson and Dustin Johnson who stole the show by crushing drives 340 yards from the range of Las Vegas' Butch Harmon School of Golf. –By Brian Hurlburt.

Harmon is a Las Vegas Golf Region resident and a proven quick wit, and was the co-host of the skills sessions along with The Golf Channel's Steve Sands. Just before Watson, a leftie, and Johnson, a rightie, got into position to unleash their golf power, Harmon quipped, "This is great because they can look at each other while they hit it!" Watson and Johnson then proceeded to rip golf balls off tees that were placed just a few feet apart from each other, providing a mirror-like image. The balls easily carried into the hitting area of Rio Secco, the home course of the Harmon School, located about 300+ yards away. But while Harmon is witty, he is also the world's top teacher (don't believe it? In a semi-annual poll of his peers in Golf Digest, Harmon has been voted tops for 10 years running).

The skills session has become a popular part of the annual Wendy's 3-Tour Challenge, an event that has raised more than $36 million dollars for the Dave Thomas Foundation for Adoption. The Wendy's 3-Tour Challenge pits three-player teams from the LPGA Tour, PGA Tour and Champions Tour against each other, and has been played at several Las Vegas golf courses over the last two decades but has found a solid home at Rio Secco Golf Club, a Rees Jones-designed Las Vegas resort golf course. Other pro-am events surrounding the tournament take place at another Jones Las Vegas golf course, Cascata, a sister course to Rio Secco and also managed by Harrah's Entertainment.

Harmon quickly dispensed pearls of golf wisdom while the two bashed golf balls. "It's not how hard you swing, it's how fast you can make the club move," Harmon said, before noting how well-balanced the swings of both Watson and Johnson are. Johnson is a full-time student of Harmon's and is often seen on the grounds of the Harmon School (which is open to ALL golfers, not just the world's best players). The School offers the ability to attend schools with Harmon and/or sessions with his highly-trained teach team. You can click now to view the official school packages for the Butch Harmon School of Golf experience. 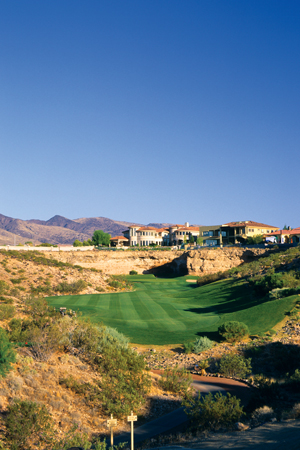 During the taping, Sands noted that Harmon has always been known as a master of length, because most of his tour current and former students have been proven deep hitters such as Davis Love III, Greg Norman, Tiger Woods, and these days Phil Mickelson and Johnson. Harmon acknowledged that is the case, but told Sands that when he gets a big hitter, his job is to ensure more accuracy than length, and usually works with the long hitters to scale it back and concentrate on keeping it in play, even if it means sacrificing a few yards in distance. But for the demonstration, Harmon has Watson and Johnson "come out of their shoes" and balls quickly disappeared out of site. After watching Johnson rip one, Watson mused, "I don't have that." Harmon simply replied "Yes you do." Stick close to The Golf Channel for schedule detail for these special The Golf Fix shows from Las Vegas. The Wendy's 3-Tour Challenge will be aired the week of December 6 on The Golf Channel.

The skills sessions came after the official pro-am when the other competitors played with sponsors and other VIP guests. The LPGA Tour team, the defending champions, are again made up of Suzann Petterson, Las Vegas Golf Region resident Natalie Gulbis, and Kerr. The Champions Tour team is Langer, Nick Price, and Kenny Perry, while the PGA Tour team is Watson, Johnson and Boo Weekly. Other Tour pros who played in Monday's event included Las Vegas Golf Region resident Craig Barlow, Mark Calcavechia, Joey Sindelar, Kirk Triplett, Tom Pernice, Jr., Fred Funk, and Keith Clearwater, among others. 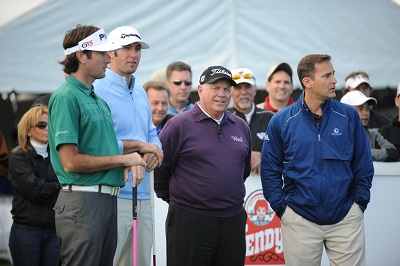