Las Vegas, Nevada (December 11, 2010)–The "No Jeans Policy" usually reserved for golf is on hiatus this week at many Las Vegas golf courses. With the Wrangler National Finals Rodeo in town–the Super Bowl of rodeo–there are a lot of cowboys and cowgirls playing at those Las Vegas golf courses, some playing on their own and some playing for good causes, and many don't take kindly to parting with their Wranglers. That was the case at the historic Las Vegas National Golf Club on Friday prior to the 9th round of the rodeo. The 24th Annual Spurs and Spikes tournament was played over the 18 Las Vegas golf holes, with several rodeo notables in attendance including Dean Oliver, an 8-time calf roping champ and pretty good golfer. —By Brian Hurlburt.

Oliver was a part of a foursome that included longtime Las Vegas PGA of America professional Scott Greer, now the general manager of Las Vegas National. Oliver, who hails from Idaho, can still hit the ball a bit, but was aces in the special roping contests that were set up on several of the holes. Successful rope attempts resulted in extra birdies, in some case eagles, and Oliver was quite the sandbagger in those cases, but then again, nearly every foursome on the course had a hand that could fling the rope in style and with accuracy. Oliver annually attends the NFR in Las Vegas, and for the last several years has served as a television grip (he keeps the camera man's cables from snagging) to get closer to the action. “I used to sit up in the grandstand and watch it, then I got a chance to do this,” Oliver told MSN.com writer Bob Harkins. “It’s kinda fun.”

The Las Vegas Golf Region is the home to many top golf courses, and just about any celebrity or athlete of note has played golf in Las Vegas from a rodeo legend like Oliver, 81, to a young pop sensation like Justin Timberlake, who hosts Las Vegas' annual PGA Tour stop, the Justin Timberlake Shriners Hospitals for Children Open. And last week, country singing legend George Strait played at Cascata, a sister course to Las Vegas National as co-host, along with Butch Harmon, of the Tough Enough to Wear Pink Classic. Las Vegas National Golf Club is a past host to several PGA Tour tournaments, including the 1967 and 1968 Tournament of Champions in addition to being one of the courses used in 1996 when Tiger Woods won the Las Vegas Invitational, good for his first PGA Tour win. Click now to view the official website of Las Vegas National Golf Club where you can reserve your tee times in Las Vegas, Las Vegas golf packages or find other information. Las Vegas National is located just minutes from the Las Vegas Strip. 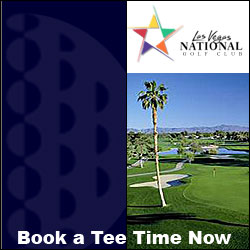 Oliver won 8 calf roping titles and three All-Around championships in his rodeo career, cementing him as one of the all-time best. But he also was an excellent golfer in his day, winning several city titles in the Boise area, and always thought be might have had a chance to be a truly great golfer had he took up the game earlier than he did. He started playing in 1965 when he was recovering from a knee injury. He was in his mid-thirties by then, but still managed to do well in big events over the years, in addition to earning a reputation as a top money golfer. "I really do wish I'd learned golf as a youngster," he has said about the game. "I don't mean to be bragging, but I really think I could have been good." The event at Las Vegas National benefited the Pro Rodeo Hall of Fame in Colorado. Guess who is a member. Photo courtesy of Idaho.gov.