Las Vegas, Nevada (December 22, 2010)–Las Vegas resident Natalie Gulbis is a very down-to-earth superstar, and seems to pretty much spend the holidays like the rest of us: she bakes cookies, sends Christmas cards, spends time with the family, etc. But probably unlike the rest of us, she also spends some of December hosting a charity event to benefit the Boys and Girls Clubs of Southern Nevada, getting a VIP tour of the ZAPPOS.com headquarters, attending a Lexus event with PGA Tour star Nick Watney, and much more. –By Brian Hurlburt.

Gulbis, who has lived in the Las Vegas Golf Region for several years, has always had a soft spot in her heart for kids' causes, especially Boys and Girls Clubs. Gulbis made New York-area clubs her charity of choice when she appeared on NBC's Celebrity Apprentice, and she has gotten involved on the local level in Las Vegas in a few different ways, including hosting her inaugural golf classic to raise funds for the organization. The event was held at Las Vegas' Rio Secco Golf Club, the home of the Butch Harmon School of Golf. Gulbis works with Harmon and plays and practices at Rio Secco, a Las Vegas resort golf course. Click now to view the official website of Las Vegas' Rio Secco Golf Club. You can reserve your official tee times in Las Vegas or Las Vegas golf packages via the website.

Gulbis hosted a clinic prior to the tournament, and then posed for photos with each group during the round. She also helped host the post-round awards party with Las Vegas DJ Chet Buchanan of KLUC, 98.5 FM. She took questions and answers duriing the clinic, and stressed the importance of practicing the shorty game. She told the audience that she spends about 75% of her time on the short game. She also said that she was very healthy heading into 2011, something that hasn't been the case for the last few years.

In the days following her charity event, she flew to Florida to host the winners of a Michelob Ultra contest. The group played the famed 17th at TPC Sawgrass among other festivities. Gulbis was excited to see the legendary hole in person. Then it was back to Las Vegas where Gulbis got down to business with Harmon in preparation for next season. "Had a great day at the Bhsg with butch." Gulbis tweeted on December 19th. I'm ready to play. First tourney is in February. Just wanted to get some work in before Christmas and some time away from golf. " Gulbis also tweeted she was nearly done sending her Christmas cards, that she was baking cookies, and that she would be spending the holiday with about 20 friends and family in Newport Beach, Calif.

During December, Gulbis also hosted a two-day summit for her marketing partners, allowing her and the group a chance to brainstorm for 2011. Gulbis is one of the most well-known golfers on the LPGA Tour, and works with several companies. She also hosted a corporate event with fellow Las Vegas resident Nick Watney for Lexus in Las Vegas recently. She is represented by IMG. But she is also serious about her game, and looks to improve on her finish of 52nd on the money list, with just more than $178,000 in earnings. She has earned more than $4.4 million in her career, with one victory coming at the 2007 Evian Masters. GULBIS PHOTO: Martin Photo Group. 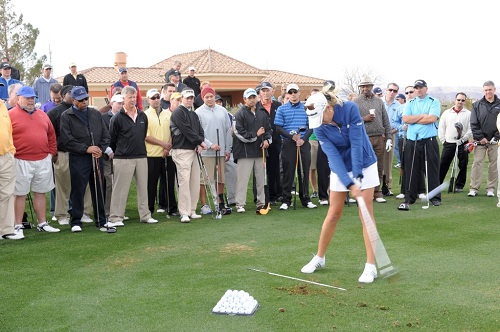