Skip to content
Las Vegas, Nevada (March 9, 2011)–There may be no more exclusive golf course in all of Las Vegas, and best of all, when you are invited to play, there is never a green fee. But you have to be asked by the owner and be willing to be challenged by possibly what is also the most difficult course in Las Vegas. Welcome to the LakeShore Golf and Country Club. Never heard of it? Read on for more about this unique Las Vegas golf course that is the host to 'golf's 5th major' according to Phil Tom, the owner. —By Brian Hurlburt.

It's tough to describe the LakeShore course, but suffice it to say, it brings the fantasy of backyard golf as a kid to life tenfold. What World Series of Poker bracelet winner Phil Tom has created around his yard in the Scotch 80s neighborhood of Las Vegas is the stuff of legend: 18 holes played over the driveway, under the stop sign, down the side yard, across the tennis/basketball court and back, over and around the pool, and in between more tight hazards than any course on earth. The touch of a surgeon and the nerves of a safecracker–or a poker pro being called all in after bluffing with 8 high–is what is needed for success at the LakeShore. Unless you're used to squeezing a wedge 15 yards down a path lined with hedges to a three-foot diameter green, or teeing off to a 'fairway' that is one-yard wide and guarded by a public street on the left and fence on the right. If so, you'll be right at home, should you figure out a way to lobby Tom for an invite. Olive, pomegranate, and peach trees shadow the layout throughout while ankle high rough guards the putting areas and fairways. Basically, Tom has created the Augusta of back yard golf, a par  54, 444-yard course that Tom calls, "the toughest course in the world." He also calls it a lot of fun. 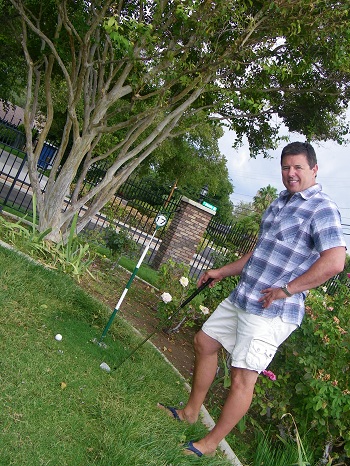 "Playing here allows you to relive your childhood, when you would stand in the backyard and pretend, like I did as a kid, that you are Jack Nicklaus or Arnold Palmer or Lee Trevino," says Tom, who won a bracelet at the 2008 World Series of Poker No Limit Hold 'Em. "I have a lot of fun playing 'real' golf but it doesn't compare to playing this course. To my knowledge, this isn't duplicated anywhere in the world. I have searched for others like but I think we are the original. And that's pretty cool that you can say you have done something that has never been done before."

As for difficulty, breaking par here is tough, even for the touring professionals who have played the LakeShore. Each year, Tom opens up the course to friends and supporters of the Southern Nevada Make-a-Wish Foundation for the playing of the annual LakeShore Open–the aforementioned 5th major–an event that marks its 12th anniversary on September 24, 2011. The event has raised thousands for the charity and Tom has said he wouldn't hold the event if it wasn't to benefit such a great cause. To prove the challenge of the LakeShore course, no player has ever broken par en route to the victory, the best score coming in 2009 when Tom and Dr. Harry Schroeder recorded a two-round total +9, earning the 'Blue Jacket' that is annually given the champion a la the Green Jacket at Augusta. Tom, himself, has earned the Blue Jacket five times but the last time he was able to put on the victorious coat was in 2007. In 2010, Josh Vorsand won the event, becoming the just the third rookie to ever claim the Blue Jacket. Vorsand was the 2009 Southern Nevada Golf Association Player of the Year and is now an aspiring professional. The Open dates back to Seattle, where Tom previously lived and created the first course of this kind.

"Pars here are big," said Vorsand following his win last year. "I tried to stay away from big numbers. The course can show its teeth, and I just tried to stay consistent. But I definitely, definitely, definitely think this is a good course." Kenny Ebalo, another aspiring pro who now caddies for PGA Tour pro Andres Gonzales, was second. Tom finished in 8th, but was pleased with the event. "The course lived up to its reputation as the most difficult course in the United States," said Tom. By the way, as the number 1 ranked 'backyard' player in the world, Tom will take on all challengers at the famed course in an individual match. You can visit the official LakeShore Open website for contact information. 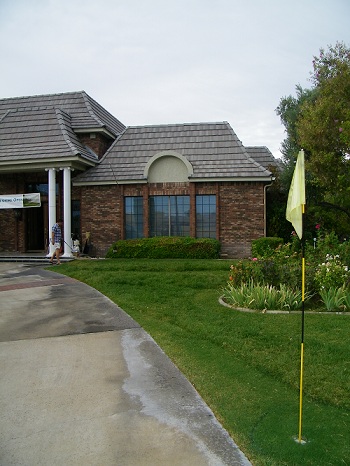 The LakeShore Golf and Country Club is open year round, but only those securing personal invitations from "the Chairman" as Tom is called are allowed the privilege of teeing it up on the course. During the round, only one club can be used, making club selection key. Some believe a less lofted club is the way to go while others go with more loft. The crown jewels of the course are the par 3, 11th hole (pool's out forever) and the par 3, 14th hole. The 11th is played over the pool to a very small patch of grass just past the cool decking. The key is managing the loft and bounce of the ball. The 14th plays across the tennis/basketball court (and the tennis net) to a very small hole which is located at the entrance to the court. Some help is provided by a slope towards the hole, but precision accuracy of pace and direction are needed to be in a position to take advantage of the slope. Also, the famous 18th hole plays down the side yard between and fence and the street is a hole where the tournament can be won or lost. Suffice it to say, you have to play it to believe it. Then someday you can tell your grand children about it.

Tom's house serves as the clubhouse and golfers walk from the front to the back during play, sometimes stopping for a cold beer from the tap or a glass of vino poured from a bottle that was stored in the wine callar located in the basement. The entire combination creates a golf experience unlike any other in Las Vegas. "The Lakeshore experience possesses the rare combination of the tranquility of childhood fun and dreams with the 'aged' downright terror and demons," writes Tom at the official website. "To crisscross your way around the unusual grounds trying to stay within you 'tai chi' energy can certainly be maddening if not impossible. Each circle of the landscape excites and frustrates regardless of your skill level. Challenges of this magnitude come with only precision designing and crazy imagination. Describing the Lakeshore is futile. This pursuit of excellence has to be experienced." 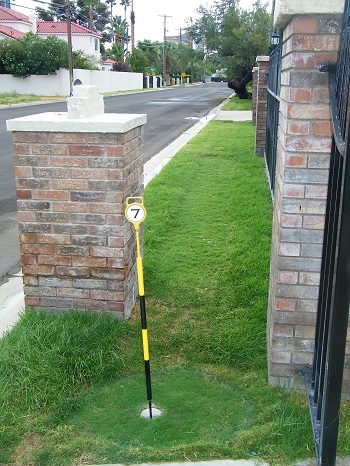