Las Vegas, Nevada (April 1, 2011)–The Michael Jordan Celebrity Invitational is underway at Las Vegas' Shadow Creek, and the man himself spent a few minutes with the media prior to the tournament. A jovial Jordan–dressed in golf duds and ready for a practice round–kept his thoughts mostly to his upcoming tournament, but did have some fun in comparing golf to baseball, what excellence means to him, etc. The tournament is the first time the course has been open to the general public, something that wasn't lost on Jordan, who has played the course dozens of times over the years. –By Brian Hurlburt.

"To me, this is one of the best attractions of the tournament is they've never really had a public tournament here at this golf course, and for them to allow me to be the first to do that said a lot about my relationship with them (MGM Resorts International and ARIA) and what they meant in terms of making this partnership happen," said Jordan. "I think that’s what the celebrities are gonna love is that once they step on this golf course, they get the chance to see the beauty and the toughness of playing it.  And hopefully they can tell others—you know, this thing can start to grow in the next couple years. At the end of the day, it’s benefiting charity organizations. So, if the golf course is an attraction, great; let’s showcase it and see if we can grow this thing to be bigger." Jordan confirmed that the event will be played in Las Vegas for at least two more years. CLICK NOW FOR OFFICIAL TOURNAMENT INFORMATION OR TICKETS.

"They came to us," said Jordan about how MGM management helped sway him to move the tournament–in its 10th year– to Las Vegas. "My contract was up in the Bahamas, and they came to me about doing it here in Vegas. And we looked at the opportunity of the golf course we love—I love Shadow Creek, always have, always felt like it was one of my top golf courses that I’ve ever played. We felt like bringing it here also would give us more of a centrally located area where we can get a lot more people—celebrities and athletes to come and play here. We changed the time frame from January to March, figuring that we can get some great weather, as you see (we did). And things worked out perfectly. And they came to me and proposed it, and I thought it would be a great idea. I had a great nine years with the Bahamas and it was a great beginning for us, but I think bringing it here allows us to take a different direction, and take another step forward and by far, if I had to compare the two golf courses, this is the best golf course. It’s one of my favorites, and I think you’ve done a heck of a job with this golf course." 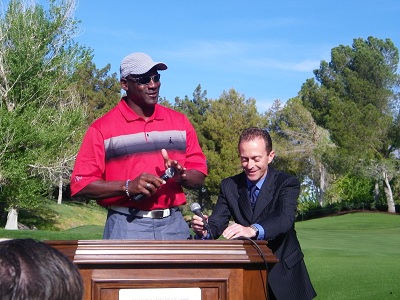 At one time, Shadow Creek– the brain child of Steve Wynn and Tom Fazio– was named the world's best golf course by the Robb Report. And it recently underwent millions in renovations, lengthening the course in addition to creating even more beauty than there was before. Jordan played the course on Tuesday for the first time in awhile and was rusty but is looking forward to the tournament.

"I haven’t been playing much, but (Tuesday) I played pretty good … I’m very proud about what I did yesterday. I mean, for a guy that hadn’t really been playing that much, and still this golf course is so hard—the greens are gonna be tough, because it’s so fast, and I’ve never played this golf course when they had rough and now you have rough here. So, that will make it somewhat entertaining. It’s pretty challenging. And yesterday I was very proud of my round … I want to win here, because I think, this is our first year, and obviously I’d love to win it at all times. Although it’s going to be somewhat difficult, because I really haven’t been playing that much, so my golf game, unless I have a good partner, it’s gonna be tough for us to win, but I would love to win here. It’s a beautiful golf course." Again, click for Michael Jordan Celebrity Invitational information.

More from Jordan on if there would be any 'side action' among the celebrities, and engaging questioner John Katsilometes in the answer: "I imagine there would be, but it’s not endorsed, I mean, obviously, if you play golf—have you ever played golf? (Yes, said Katsilometes). If you ever played where you didn’t at least bet a dollar? (I’ve played often when I’ve lost a lot of dollars, replied Katsilometes, from the Las Vegas Sun) So that’s what the game provides—it provides competition between the golfers. But we’re not sitting here encouraging it. It’s a part of the process."

Jordan on excellence and who will win: "One of the things that I have done in the past is try to provide entertainment and fun things for people to enjoy.  And, as I say, in the past—in the Bahamas, we’ve done a good job. I think the people there did a great job in putting on a tournament, and I don’t think this is going to be a step down—I think this is actually a step up. I think this is—as you see, the golf course is very beautiful, the relationship with Aria and myself has been a very warm and very pleasant relationship that I think will continue to grow. In terms of who’s gonna win, I haven’t made the pairings yet. But I definitely want to win—you know, and I’d do everything we can to try to win, but it should be fun. And ‘excellence’ to me is being able to put forth all the energy and determination in how I work to provide a certain entertainment, a certain fun to people who are watching and to people who are involved, who participate. And all the things that I’ve done in the past, making sure it provides entertainment. When I played the game of basketball, we were there to entertain the fans. And my life has been that way. And I’ve been trying to do that and provide that to different partners that I’ve been involved with. And from corporate sponsors to basketball to basketball relationships. So this hasn’t changed at all."

On the differences and similarites to golf, basketball and baseball and which is the most difficult: "Golf. I would say golf (is the most difficult). With baseball and basketball, it’s a game of motion. You get a rhythm. I came from a game of motion. And stopping all that and then trying to hit a golf ball, it makes it more difficult for me. Baseball, to some degree, you got the ball come at you, you react, blah, blah, blah.  Golf is totally the opposite. You gotta make the ball go, so it’s a little bit different. If had to say which is harder, I think golf is a lot harder than baseball and basketball." 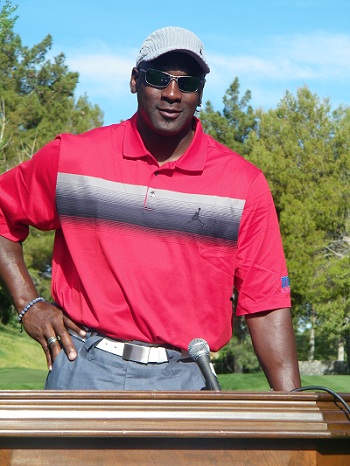 To close it out, Jordan said he is happy he played basketball first because, if not, he would have spent a lifetime trying to conquer the game of golf. "One I was good at and one I’m not," said Jordan. "I love the game—my passion for golf is the same as the passion for basketball. As a kid I played basketball before golf. Thank goodness, because if I played golf first, I’d probably have been a golfer, because that’s how much it drives me to excel and to conquer this game. If you guys ever played the game of golf, one of the frustrating parts about it is one day you feel like you got it, and the next day or the next two days or the next three days you can lose it. If I had to compare the two of em’—glad I didn’t play golf, because it would have driven me totally nuts whereas basketball, I’m in control. I got the ball in my hand, I’m totally in control.  Whenever I’ve got the golf club in my hand I hit, I don’t know where this ball is going, so I’ll be aware of you guys standing in front of me. Do not stand in front of us; we’re not professionals."