Las Vegas, Nevada (April 12, 2011)–Las Vegas always does it big. And that was the case at the grand opening of the newest Las Vegas Golf and Tennis store which is located near the Las Vegas Strip. Two of the biggest names in sports were on hand to celebrate, fellow Las Vegas residents Andre Agassi and Natalie Gulbis. The new location is being called a SuperStore and features a very special partnership with TaylorMade. –By Brian Hurlburt.

“We couldn’t be more thrilled to be opening another golf retail shop, so centralized at that, with the help of TaylorMade Golf,” said Las Vegas Golf & Tennis Superstore owner Ron Boreta, who is close friends with Agassi. “This has been a family-owned business for nearly 40 years, and we look forward to continuing to provide the community with not just golf and tennis equipment, but job opportunities and commerce as well.” The new location is located at I-15 and Tropicana, just north of the very popular In-N-Out Burger, on Dean Martin Drive. On the other side of the freeway is the majestic CityCenter.

A TaylorMade Whiteout took over the 15,000-square-feet converted warehouse the night of the grand opening when Gulbis entertained with autographs, photos and then participated in a special putting contest. Nearly half of the new Las Vegas Golf & Tennis store is comprised of TaylorMade-adidas equipment, apparel and accessories, while the tennis portion of the retail space is anchored by adidas Tennis apparel. In addition to selling apparel and equipment, Las Vegas Golf & Tennis is home to the only TaylorMade Fitting Center in Las Vegas, which uses computerized, optimized launch monitors and technology that allow consumers to experience a fitting in the same manner in which professional golfers do. Las Vegas Golf & Tennis also offers club repair and non-performance assistance.

The Whiteout paid tribute to the hottest equipment rage in the world, TaylorMade's new line of R11 drivers that feature the White technology. TaylorMade Executive Vice President David Abeles was at the opening, fresh off some time at Augusta during Masters week. He said that about half of the 99 golfers in the field were using the TaylorMade driver. He also said that what makes the club unique is that it is the only driver on the market that allows the golfer to independently adjust the loft angle, the face angle of the club, and the dispersion aspect of the club. The R11 driver is taking the golf world by storm for not only its revolutionary technology (golfers can basically dial in the driver to pinpoint specs that best suit them and any particular course) but also for the white paint scheme on the club.

The white paint makes the club look sleek but it also serves a purpose. In addition to its visibility on camera, TaylorMade's revolutionary drivers were painted white to satisfy the demands of discerning PGA Tour players who continuously requested maximum contrast between the club face and the crown of the driver. The white crown color and black PVD face of the R11 and Burner SuperFast 2.0 provides optimum contrast against the ground to the clubs easier to aim. This advantage is even more pronounced in lower light, such as when the tee box is in shade or shadow, on overcast days or when the sun is low in the morning and in the evening. The crown color also eliminates high-intensity "hot spots" caused by reflected sunlight that afflicts gloss-finish metalwoods. Shortly after the R11 was named an "Editor's Choice" and both drivers was awarded gold medals in Golf Digest's recently released 2011 Hot List, TaylorMade began the 2011 season on top in the driver brand count with a total of 10 drivers in play in a field of just 29 at the Hyundai Tournament of Champions. At the Sony Open and the Bob Hope Classic a combined total of 41 players teed up white drivers. 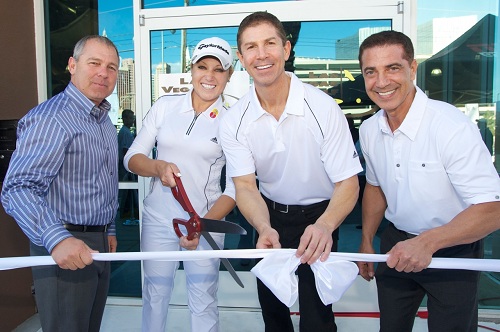 During her comments at the opening, Gulbis encouraged anyone who would listen that the technology is superb. "I am hitting the ball 15 yards farther this season than last year, and getting home in two on par 5s that I never would have before," said Gulbis. "This was the most exciting off season I have had in my career and that is because of what TaylorMade has created." Gulbis has lived in the Las Vegas Golf Region for several years and works with Las Vegas' Butch Harmon who operates the Butch Harmon School of Golf at Rio Secco Golf Club.

“That Las Vegas Golf & Tennis would choose TaylorMade and adidas Golf to stock such a significant part of its new store is both exciting and a testament to the respect consumers have for the brands,” said Abeles. “We are very excited at this retail expansion that Las Vegas Golf & Tennis is experiencing, and proud to be a part of its heritage within the community.” Las Vegas Golf and Tennis was created by Voss Boreta who was a trailblazer in golf retail for the last 40 years. Now his sons, Ron and John, are involved and spearheading the new expansion. Besides the new location, golfers in Las Vegas can visit a location in Henderson that is located in the District at Green Valley Ranch. Or they can visit LVGolf.com. Some of the report courtesy TaylorMade press release.