Las Vegas, Nevada (April 23, 2011)–Jack Nicklaus has designed several Las Vegas golf courses but his latest creation in the Las Vegas Golf Region has been turning heads since it opened in 2008. The course is now called Coyote Springs Golf Club (formerly The Chase) and was recently included in Golf Digest's "America's Greatest Public Courses Top 100", coming in at 95 on the prestigious list. Click now for the official Coyote Springs website where you can book your tee times online. –By Brian Hurlburt.

Coyote Springs was also ranked the #2 best new course in 2009 by Golf Digest and #3 by Golf Magazine on its "Best New Courses You Can Play" list in 2008. In 2010, Golfweek included the course on its list of Top 100 Residential courses. The course is just one of many Nicklaus golf courses to earn such accolades and most assuredly belongs among his best.

In other news from Coyote Springs, the facility now has a liquor license and is offering sandwiches. And, as has been the case for several months, golfers can enjoy this Las Vegas golf course without a mandatory caddie. Coyote Springs is located about 50 miles north of Las Vegas but is worth the drive. Tee times are also now available seven days a week at the course.

“No words arranged by me can paint the epic sweep and isolation of The Chase (Coyote Springs Golf Club)," is how Sports Illustrated's Gary Van Sickle has described it. "It’s a daily fee golf course that feels like your own private desert. This is more than just a golf course; it’s a golf experience.” Also available at Coyote Springs are official Las Vegas golf packages in conjunction with the Golden Nuggett. Click now for this Las Vegas golf deal that starts at just $140 for room and round. 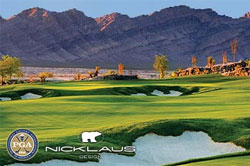 From Coyote Springs: "Opened for daily play at the end of April in 2008, the golf club is the anchor for the future land development project within the over 40,000 acre development.  Coyote Springs Golf Club is a par-72 Nicklaus Signature Design with tees ranging from 7,471 yards for the championship tees to 5,349 yards for the forward tees. The course has 11 water features, including one with a massive five-tier waterfall surrounding the picturesque finishing holes number 9 and 18."