Las Vegas, Nevada (April 30, 2011)–Tiger Woods and his foundation management have returned Tiger Jam to Las Vegas after a one-year hiatus, and that's a good thing. This city does big events like no other, and this benefit for the Tiger Woods Foundation fits that bill, having raised millions to help kids across the globe, and specifically at the Tiger Woods Learning Center in California. Woods, who is injured, entertained a limited crowd of VIPs on the driving range of Las Vegas' Cascata with the help of PGA Tour buddie John Cook and Grammy-winning musician–and Tiger friend–Darius Rucker. The Q&A and brief clinic ran the gamut of topics from his injury to Tiger Jam to the state of the PGA Tour. —By Brian Hurlburt.

When asked about his recent injury by emcee Chick Hernandez from Comcast Sports, Tiger was his usual, coy self, saying, "I feel good, how about you?" After Hernandez responded as most middle-age men do–I could lose a few pounds but other than that I am pretty good–Tiger went into a little more depth about the injury that will keep him out of next week's Wells Fargo Championship. "It was tough going," Woods said. "I was in a boot for five days, (and I) still have to sleep in a boot so I have been just kind of resting it."

Tiger was in good spirits throughout the 45-minute session, easily fielding questions from Hernandez and the audience. He revealed his deep knowledge and interest in the game, most noticeably when he and Cook, who has won two times on the Champions Tour in 2011, were asked about how deep the talent is now on the PGA Tour as compared to previous generations. "It has changed substantially," said Cook, who won the PGA Tour's 1992 Las Vegas Invitational. "We were geared to swing at a swing speed that would get the ball on the center of the face all the time and your distance control was of utmost importance whereas kids today are taught to swing hard and reign it in from there. Today the talent level is much deeper; the best players are about the same, but there are so many more of them. Every single week it seems like you say, ‘Who is this kid? Well, he’s winning the tournament so he must be pretty good.' Back in those days there were 10-12 guys who were winning a lot. The progression of the game has been great and obviously Tiger has had a big influence on the modern game and with getting more and more people involved so I think it is in a pretty healthy state."

Tiger agreed with Cook and believes that the sky is the limit for how good future players on the PGA Tour can become. He cited recent PGA Tour champion Gary Woodland and Dustin Johnson as examples of the new age golfer that is coming on the scene. "You have a got a guy on the tour now (Woodland) who can carry it  350 and it’s not like he is really trying," said Woods. "Gary used to play basketball in college. Then he said, ‘I’m not playing basketball anymore, I’m gonna play golf' and seven years later, boom, he is a winner on the PGA Tour. And Dustin Johnson can do 360 degree dunks. We’re getting athletes now playing golf; and that’s what is cool. Wait until we get a Michael Jordan-type (athlete) who is 6' 4", 6' 5", 6' 6" or a Bo Jackson, somebody with that much power, but with feel, touch, and the competitive drive and the understanding of how to play the game. That’s what's coming, and that's exciting for us players."

Woods is scheduled to take part in all of the events surrounding Tiger Jam including the dinner and concert on Saturday at Mandalay Bay Events Center. Keith Urban and John Mayer are the headliners for the show. Other events during Tiger Jam include amateur rounds at both Cascata and Rio Secco, two Rees Jones-designed Las Vegas golf courses. Both of these courses are also open to the public when not hosting Tiger Jam or other world class events. "It's great to be back," said Woods about being back in Las Vegas. "I think everybody  has always had a good time and we have an amazing lineup so it will be fun.” 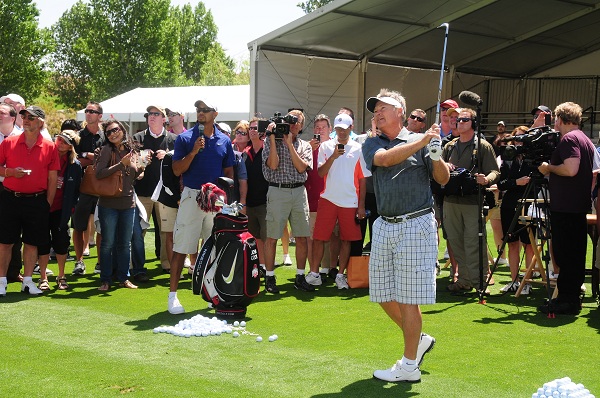 About Tiger Jam and the Tiger Woods Foundation: Since its creation in 1998, Tiger Jam has raised more than $12 million for programs of the Tiger Woods Foundation through its sold-out performances and one-of-a-kind auction items. Since 1996, the Tiger Woods Foundation has reached more than 10 million young people by delivering unique experiences and innovative educational opportunities for youth worldwide. Specific programs of the Foundation include the Tiger Woods Learning Center, a one-of-a-kind education facility custom-built for the underserved youth of Southern California and Washington, D.C. Everything at the Learning Center is about active participation and hands-on learning. Students in grades 5-12 participate in classes ranging from forensic science to graphic design. The Foundation has also helped send 35 bright, young students to college through the Earl Woods Scholarship Program. Scholarships are renewable for up to four years, with students chosen based on demonstrated financial need and a proven commitment to community service. Tiger's Action Plan is a collection of curricula distributed to students nationwide. Each curriculum contains interactive and informative lesson plans that focus on subjects important to young people including, exploring careers, planning for the future, financial responsibility and the importance of making a difference in your community. In addition to its original programming, the Foundation also awards grants to youth-based organizations around the world. For more information, visit TigerWoodsFoundation.org.