Las Vegas, Nevada (June 30, 2011)–Over the years, I have had the occasion to interview Jack Nicklaus several times, each of those being sit-down sessions. For the first time, the Golden Bear and I communicated via the 21st century–email–as he commented about Las Vegas' Coyote Springs Golf Club, a course he created. Coyote Springs 'sprung' to life if 2008, and was immediately included on just about every 'Best New Course' list available. —By Brian Hurlburt.

The following are the questions and answers exchanged recently with Nicklaus who has a very deep history with the Las Vegas Golf Region. He won seven PGA Tour tournaments in Las Vegas, becoming, I believe, the only player in history to win two PGA Tour tournaments in one year in Las Vegas. In 1963 he won both the Tournament of Champions and the Sahara Invitational. In all, he won the TOC three times and the Sahara four times.

Coyote Springs was included in Golf Digest's 2011 list of "America's Greatest Public Courses Top 100", coming in at 95 on the prestigious list. And this Las Vegas Golf Region course was also ranked the #2 best new course in 2009 by Golf Digest and #3 by Golf Magazine on its "Best New Courses You Can Play" list in 2008. In 2010, Golfweek included the course on its list of Top 100 Residential courses.

GolfLasVegasNow.com (GLVN): Jack, as you look back, what are your thoughts about the Coyote Springs course and what makes it unique in your mind?

Jack: First of all, it is kind of in a unique area. It is about 45 minutes outside of Las Vegas and situated in an area where there really was nothing. Coyote Springs created its own area and identity. Similar to Lyle Anderson’s vision for Desert Mountain, when he took a remote piece of property north of Scottsdale and well north of Phoenix and created one of the world’s top golf clubs and communities, Harvey Whittemore had a vision for what he wanted to do with Coyote Springs. We were fortunate to be part of that vision. We took a piece of property that had a very nice setting, surrounded by mountains, and created some movement in it and created, what I think, is a very nice golf course.

GLVN: I’ve been told that you thought there is a feeling of movement throughout the course, and you made sure to tie in the mountain backdrop with the course. Please discuss how the course was built to become a part of the overall landscape and surrounding environment.

Jack: The property does have a few washes that run through it and a couple changes in elevation but there was not as much in the golf course—at least in this first golf course we have done. The first golf course sits in a relatively flat area. We tried to tie in some of the features on the rest of the property and some of the outside features to make it feel like the mountains were coming into the golf course. We were bringing the property together, rather than having just a flat piece of property. We try to do that everywhere it makes sense.

GLVN: You have earned the Top 100 recognition for many golf courses. What does it mean to you after so many years in design business when a new course is honored that way for the first time, as Coyote Springs was recently?

Jack: It’s always nice to have your golf courses receive awards and recognition for your effort, the effort of the developer, and what the collective team accomplished. I think Coyote Springs is a really nice golf course that’s going to provide a lot of enjoyment and good golf for people for many years to come. 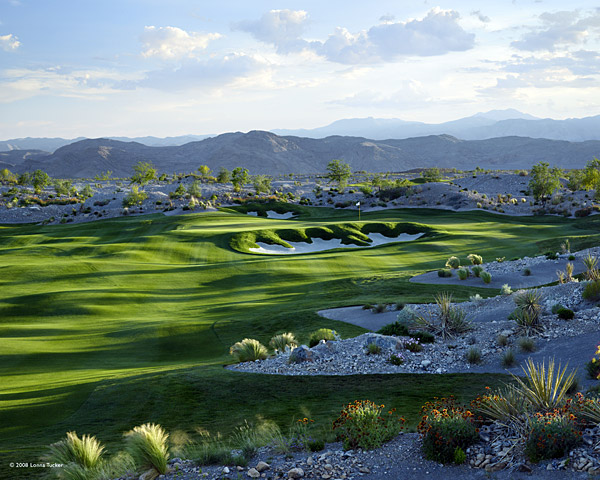