Las Vegas, Nevada (July15, 2011)–It was go time at Las Vegas' Angel Park Golf Club, and dozens of the Las Vegas Golf Region's top pros and amateurs played in the Cleveland Pro-Scratch tournament. Longtime Las Vegas golfers Joel Kijowski and Tyler Mays won with a two-round total of 62-65–127. Once again, the 36 holes of Arnold Palmer-designed golf at Angel Park were played during the annual tournament. —Staff report and release from OB Sports.

“Tyler really came through when we needed him,” stated Kijowski. “We played very well both days, especially the first day, good enough to have an opportunity to get into a playoff for all the marbles. Luckily we made three good shots and ended it on the first hole.” Kijowski and Mays grew up playing junior golf together and have been friends for many years.

In the event more than 60, two-person teams comprised of one professional and one scratch amateur competed for a total prize purse of more than $17,000 in a 36-hole, stroke-play, one-better-ball format. The event, which is presented in part by Club Car, draws teams of golf professionals and amateurs from all over the country as teams travel from California, Arizona, Washington and as far away as Hawaii and Florida to compete. Notable local pros such as Robert Gamez, Jeremy Anderson and Ed Fryatt have also played in the past. This year the event drew some new notable participants including Las Vegas resident and former Major League Baseball star Greg Maddux and former PGA Tour Professional and current Texas resident, David Ogrin.

“This event is indicative of the game and the unique way it brings people together,” stated Gordon Digby, Account Manager for Cleveland/Golf Srixon. “It’s a fun-filled event where everyone is enjoying themselves, but they still manage to post some pretty impressive scores. We’re proud to be the title sponsor.”

“Congratulations to Joel and Tyler.” said Phil Green, President of OB Sports Golf Management. “When they shot out of the gates and posted a 62, we thought, they’re going to run away with it, but in the end we had an exciting playoff to decide the champions."

Following the first round of play, the “Cloud Nine Derby Shoot” kicked off. The field is limited to the top 15 teams that prepaid at registration prior to the first round. This fun-filled event within the event is part of local lore as the 1996 Cloud Nine Derby featured an exciting hole-in-one by local touring professional Robert Gamez on the first hole.  This year the team of Dirk Ayers and Robert Schultz won the Derby by edging out the eventual two-ball champs Kijowski/Mays. 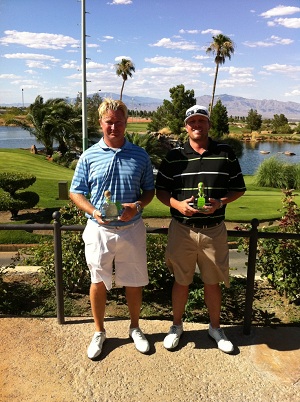 Mountain Course and Palm Course were both designed by Arnold Palmer. The club also has a 12-hole Cloud Nine Short Course, the World’s Original natural grass putting course and an expansive practice tee – all of which are lighted for evening enjoyment.

Angel Park Golf Club is professionally managed by OB Sports Golf Management, a diversified, golf-oriented company with a long history of success in the golf industry. OB Sports currently manages 42 premier golf courses and country clubs throughout the United States. Known for its comprehensive and personalized services since 1972, OB Sports has become widely acclaimed as the leader in boutique-style golf course management.