Las Vegas, Nevada (July 23, 2011)–The photo gallery at the official website of the Las Vegas Golf Region's Wolf Creek Golf Club is a must see. Once you check out these photos, you'll easily understand why Wolf Creek is annually included on the Top 100 lists of major golf publications. Click now to view the official Wolf Creek photo gallery at GolfWolfCreek.com. —By Brian Hurlburt

Who knows, but this very photo gallery might be the reason that EA Sports executives decided to add Wolf Creek as an official "fantasy" course to the best-selling Tiger Woods video game. Those executives have gushed in the past when describing the 18 rugged holes of Wolf Creek Golf Club. “Tiger Woods PGA TOUR® gamers have an endless desire for fantasy courses, which is one of the main reasons Wolf Creek was high on the list of courses we wanted to sign,” said EA SPORTS product manager Praveeta Singh upon the release of the game a couple years ago (Wolf Creek continues to be a mainstay). “The coolest part is that Wolf Creek is a fantasy course that actually exists.” 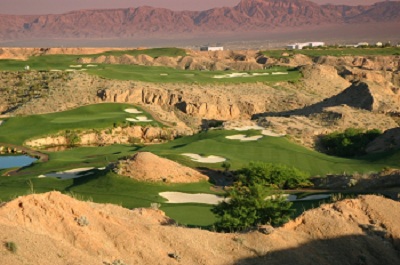 Wolf Creek General Manager gets many comments about the photos. And he also has golfers from all over the world making the trip to Mesquite solely because they played the electronic version of the holes via the Tiger Woods video game. Wolf Creek is the crown jewel of the mini-golf mecca of Mesquite, Nevada, located 77 miles north of Las Vegas. And the photos prove it.