Las Vegas, Nevada (September 14, 2011)–It is customary for golf courses to put plaques on the course to mark historic shots. And now, a plaque has been placed in the ground marking the spot where the first "walk-off' ace in PGA Tour history was recorded. In 2010, Jonathan Byrd aced the 17th hole at TPC Summerlin during a playoff to win the Justin Timberlake Shriners Hospitals for Children Open. –By Brian Hurlburt.

Byrd was on hand for to unveil the plaque recently, but it's interesting to go back about one year and relive the moment. Byrd knocked in a 6-iron in growing darkness. The shot zapped the playoff hopes of Cameron Percy and former Las Vegas champ Martin Laird. Byrd: "It's kind of hard to process because I'm still kind of in shock," Byrd said minutes after hitting the shot in 2010. "I've got to go back to the putt before on 18. I hit a poor shot into the green and get kind of fortunate that it stays up in the rough and hit a chip and gave myself a chance to stay in the golf tournament and just made a great putt from about 12 feet, I guess, stayed in the tournament. We're sitting there on 18 green trying to decide whether we're going to keep playing or not, and I wanted to — I felt like we could get one more hole in on 17, and the other guys did, too. We decided just one more hole, and if we get to the green and it's too dark, we'll stop. So I'm up first, and I've played that hole well in regulation and in the playoff, hit good shots, and just went through my same process, and for me it was put a 6-iron kind of back in my stance and try to play more of kind of a sweeping draw into that left pin and curve it over to it. It started perfect, it turned perfect, and it was coming right down the flag. I thought I hit it too good. I thought I hit it too far, and I couldn't see anything. But to hear the reaction as it went in, I was just in shock. I was trying to be considerate of my playing partners because two more guys had a chance to keep playing, and I didn't want to overreact. I'm numb pretty much."

Byrd on what his playing partners said when the ball went into the hole: "I mean, they were pretty excited, I think. I mean, it's pretty hard to follow that. They came over and were very gracious and congratulated me and told me, "great shot." Both of them did and the caddies. And everybody was smiling. I think when something like that happens that's out of their control, there's not much they can do about it. They've got to figure out a way to follow it up." 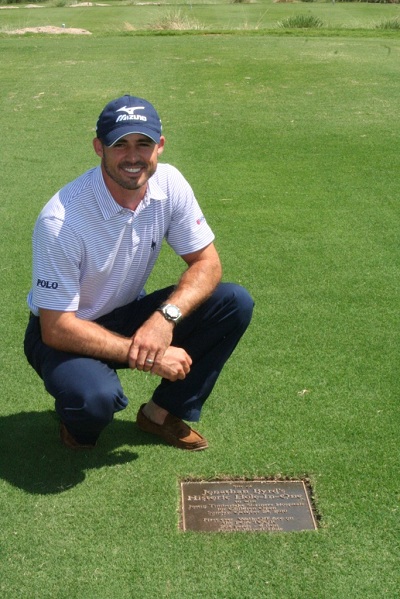 The 2011 Justin Timberlake Shriners Hospitals for Children Open is September 29 – October 2 at Las Vegas' TPC Summerlin. Byrd will be back to defend. Many other special events will happen surrounding the tournament. Click now for details and tickets.