Las Vegas, Nevada (October 3. 2011)–Kevin Na lives in the Las Vegas Golf Region, and he just won Las Vegas' PGA Tour event, the Justin Timberlake Shriners Hospitals for Children Open (the first resident in history to do so). In 2006, he was living in Rancho Cucamonga and won a hometown Nationwide Tour event there. Those two tournaments are his only two victories in the last five years. So, minutes after his Vegas win on Sunday, Kevin Na was thinking about moving to Augusta, Georgia, the location of a little tournament called The Masters. –By Brian Hurlburt.

"Hopefully I'll keep winning — keep winning here, and if I want to win a tournament somewhere, I guess I gotta move .. maybe I'll move to Augusta or something," Na said with a big laugh at the Vegas post-round press conference. Seriously, Na isn't house hunting in Georgia, but as fickle as the game can be, who knows. Na has been on the PGA Tour for eight years and the Vegas win was the first of his career. He lost in a playoff at the Chrysler Classic of Tucson in 2005 and has been seeking the elusive win ever since.

"Every time I'm in this position I feel like I'm going to win," said Na. "Honestly I do. And did this week feel any different than any other week that I fell short? Maybe a little bit, but nothing ridiculously different, but I think I was a little more comfortable, maybe because I was in my hometown, my home course, but I think I was definitely ready. And I was mentally ready, physically ready, and it was just time for me to win." With the win, Na becomes the first resident of Las Vegas to earn a PGA Tour victory in a PGA Tour event played in Las Vegas. There are about 30 tour pros who have deep ties from Las Vegas, including Nick Watney, another resident, who finished second.

"I hit a lot of balls at TPC Las Vegas," said Na about how he prepared for the tournament. "I like coming to play (TPC) Summerlin. I was off three weeks (prior to Las Vegas), and the first week I didn't practice. And then the next two, the last two weeks before the tournament I played here every day. Every day I played 18 holes. It was just a matter of making sure I'm more comfortable with the holes and the shots that I want to hit, and I played here every day, and I think that really helped … the first week I think I hit like two or three balls out there on each hole. I chipped around the greens, putted. And then the next week I played with other PGA Tour pros … Ernie Gonzalez, he lives out here. He's won on TOUR. Scott Piercy. I played with Billy Horschel. And any of the guys that were here. I teed off and played with the local guys, and we'd get competitive, played for lunch. And you know, it's amazing how deep the pockets get for TOUR players. It's a pride thing. But we had a lot of fun." 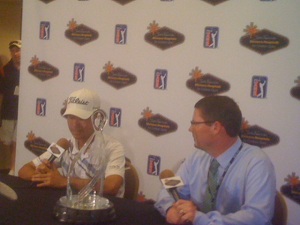 But now Na is the big dog of the Las Vegas Golf Region contingent. "I got all the bragging rights," Na kidded. ".. I think it's hard. Sometimes it's even — I think it's more pressure for the hometown guys because, you know, all your friends and family are out there watching you play. And you want to win, it's your hometown. You're playing in front of your hometown people, but sometimes I think that adds more pressure."

Na Victory Notes: With this victory, Na earns fully-exempt status through the 2013 season. Earns a spot in the following events in 2012: Hyundai Tournament of Champions, Humana Challenge, Arnold Palmer Invitational, RBC Heritage, THE PLAYERS, Crowne Plaza Invitational at Colonial, The Memorial Tournament, AT&T National and PGA Championship. Na set the 72 hole tournament scoring record with a 261. The old record was 263 by Jonathan Byrd, Martin Laird and Cameron Percy in 2010 and Marc Turnesa in 2008. Na is the 12th consecutive champion of the event to record every round in the 60s.