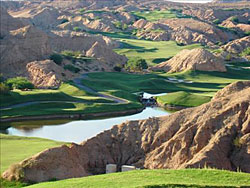 Las Vegas, Nevada (October 22, 2011)–The article was called Fabulous Fairways: 10 of the Best Places in the World to Play Golf. And it was released by the Wall Street Journal—Europe earlier this year. It’s one thing for a golf publication to make a claim about a course’s fabulousness–in this case Mesquite's Wolf Creek Golf Club–; but when arguably the most influential media brand about money and finance makes that claim, well, it just seems to lend even more credence to the opinion. –By Brian Hurlburt.

Kind of like when your best friend tells you about how good a restaurant is; you’ll probably take that advice more than you would from the food critic raving about the same place. Anyway, Wolf Creek Golf Club, located in Mesquite, Nevada, about 77 miles north of the Las Vegas Strip, has had jaws dropping since it opened about a decade ago. And it is on quite a run of winning awards, having recently been crowned the champ of the inaugural Fans Choice Award at GolfDigest.com.

Click now to view the official website of Wolf Creek Golf Club. There you can reserve your online tee times and official Mesquite golf packages. And check out the stunning photo gallery.

This is how the WSJ-Europe staff described Wolf Creek, a course that also recently won a Fan’s Choice contest at GolfDigest.com, capturing more than 340,000 votes in the process: “The topography is surreal, so take your camera as well as your clubs. Golf at Wolf Creek is an exciting roller coaster ride over and through the dramatic Mesquite canyons, just one hour from Las Vegas. If the wind is blowing you can say goodbye to a good score; yardages are difficult to gauge, and wayward shots will not be forgiven. They’ll rebound off rocks or vanish into cavernous ravines. Expect awe-inspiring 360 degree views, plenty of elevation changes, and lush green fairways that contrast vividly with the surrounding red rock mountains, steep.”