Las Vegas, Nevada (November 6, 2011)–PGA Tour veteran and Southern Nevada native Craig Barlow, Long Drive Visionary Art Sellinger, and lady amateur champion Laurie Johnson were inducted into the Las Vegas Golf Hall of Fame this weekend. It was a varied class of inductees, accented by a guy who said he had traveled to dozens of countries, played and performed with hundreds of Tour pros, but "never had to play my second shot." —By Brian Hurlburt.

That's right. Art Sellinger, a two-time World Long Drive champion who grew up playing some of the most historic Las Vegas golf courses, made an international name for himself by hitting the ball B-I-G off the tee … but never having to walk the fairway to find it after that. Sellinger owns and operates Long Drivers of America and its flagship event, the RE/MAX World Long Drive Championship. Golfers, er, big hitters, from all over the world now attempt to qualify for the finals held in Mesquite, Nevada, located 77 miles north of the Las Vegas Strip. Just a day before the induction, Sellinger watched as Carl Wolter earned the 2011 title with a blast of 409 yards in the clinching match (in previous rounds he hit drives of 450+).

"I always thought that if I hit it over the trees I was strong enough to hit it back," Sellinger said during his remarks about his initial love of the long ball, no matter where his tee shot ended up. During his acceptance speech Sellinger also took special time to mention his brother, Saul, and accepted the induction into the Las Vegas Golf Hall of Fame on behalf of the entire Sellinger family. "You could've knocked me over with a feather when I got the call," Sellinger said.

LPGA Tour star and Las Vegas Golf Region resident Natalie Gulbis served as the evening's emcee. Gulbis works with fellow resident Butch Harmon at the Butch Harmon School of Golf located at Las Vegas' Rio Secco Golf Club. Gulbis said it was Harmon who convinced her to move to Las Vegas and over the last decade has come to love the city.

Barlow, who has played in seven major championships and made more than 150 cuts on the PGA Tour, was born and raised in Southern Nevada. He thanked many people for helping to make his induction possible, including his parents and previous Las Vegas Golf Hall of Fame inductees Eric Dutt and Brady Exber. Exber talked about Barlow during a video played prior to Barlow's speech. "I don't have a son, but if I did, I'd want him to be just like Craig Barlow," said Exber. Exber and Dutt also said that Barlow is one of the hardest workers on the PGA Tour and his perseverance is what allowed him to have a career that has spanned two decades.

Johnson, a CPA by trade, is one of the best amateurs to have ever graced the fairways of Las Vegas golf courses. She has been a part of 18 team or individual championships including cementing her induction earlier this year with a win at the Nevada State Women's Amateur. "She could be the poster girl for course management," said Womens Southern Nevada Golf Assocation President Janet Weber about Johnson. Johnson also gives back to the game by helping SAFENEST and other charitable organizations. Johnson highlighted her speech by talking about her parents, including her father who passed away 26 years ago. 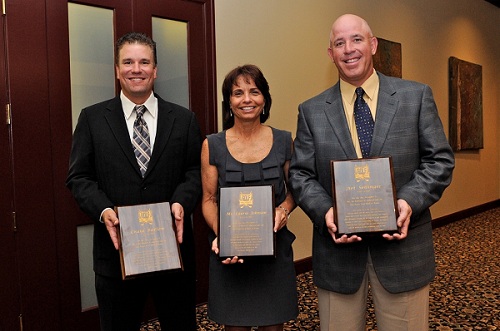