Las Vegas, Nevada (November 8, 2011)–Some of the world's best golfers are in town today completing the 20th year of the Wendy's 3-Tour Challenge. This Las Vegas golf tournament played at the resort Rio Secco Golf Club features three players from the PGA Tour, LPGA Tour and Champions Tour playing against each other. Prior to the main event today, some of the pros offered golf tips to Golf Channel viewers and others gathered live at the Butch Harmon School of Golf. –By Brian Hurlburt.

Cristie Kerr and Gary Woodland, among others, shot special segments of The Golf Channel Show, The Golf Fix, while Harmon and TGC commentator Steve Sands described the action. Kerr was up first and demonstrated how to hit varying distances with wedges. "These should be the easy clubs, but for many amateurs that isn't always the case," said Kerr during her segment.

"Most amateurs make the same swing whether they are trying to hit it 30 yards or 80 yards," Kerr continued. "You need a system … you need to turn your body and just use your arms." Kerr then showed how she hinges her hands/club at different angles during the swing to alter distance. Harmon was quick to note that she was always in control and in tempo with each swing. "I watched Tom Kite a lot, and I think he is the best wedge player I have ever seen," Kerr said.

The full field of the event was Jonathan Byrd, Gary Woodland, and Boo Weekly for the PGA Tour; Jay Haas, Kenny Perry, and Mark Calcavecchia for the Champions Tour; and Natalie Gulbis, Kerr, and Paula Creamer for the LPGA Tour. Now celebrating its 20th anniversary, the Wendy’s 3-Tour Challenge, benefiting adoption, is the only professional golf tournament that pits three players from the PGA TOUR, LPGA and Champions Tour against each other in a head-to-head competition for tour bragging rights and a share of the $1 million purse. The event will be televised on The Golf Channel. 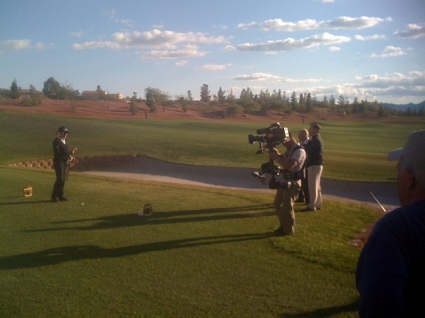