Las Vegas, Nevada (November 12, 2011)–Butch Harmon, the world's best teacher, is a veteran himself. And that is one of the reasons he spends a lot of time honoring them throughout the year. And in 2011, he took it up a notch with the playing of a benefit tournament for OperationFrontDoor.org, a new foundation he has started. The event took place at Las Vegas resort course Rio Secco Golf Club and featured several wounded veterans playing and greeting players. –-By Brian Hurlburt

The event was spearheaded by Las Vegans John and Kathy Manni and Caesars Entertainment VP of Golf Operations Eric Dutt. CBS Analyst David Feherty was also involved via his Troops First Foundation. Prior to the golf, Harmon gave a clinic, imploring those watching to swing at 80% and to "leave your ego at home" before playing golf.

Harmon was recently named the World's Top Instructor for the 12th-straight year in a poll of his peers released by Golf Digest. Among his pros currently are Phil Mickelson, Dustin Johnson, Nick Watney and Natalie Gulbis. Previously, Harmon has worked with Tiger Woods and Greg Norman, among others, helping both players reach the top of the World Rankings.

Operation Front Door purchases homes for deserving veterans. The organization recently purchased its first home for a veteran. Harmon said the goal of the organization is to raise $5 million over the next few years.

One of the veterans playing in the tournament was recently awarded the Congressional Medal of Honor. Leroy Petry earned the recognition for his heroic actions during a firefight in Afghanistan. Among other actions, Petry threw an enemy grenade away from him and other soldiers saving their lives but losing his hand when it went off just as he released.

"So today is only the second time during the wars in Afghanistan and Iraq – indeed, only the second time since Vietnam – that a recipient of the Medal of Honor from an ongoing conflict has been able to accept this medal in person," said Preside Barack Obama at the awarding of the medal. "And having just spent some time with Leroy, his lovely wife Ashley, their wonderful children, in the Oval Office, then had a chance to see the entire Petry family here – I have to say this could not be happening to a nicer guy or a more inspiring family."

Thank you all veterans. 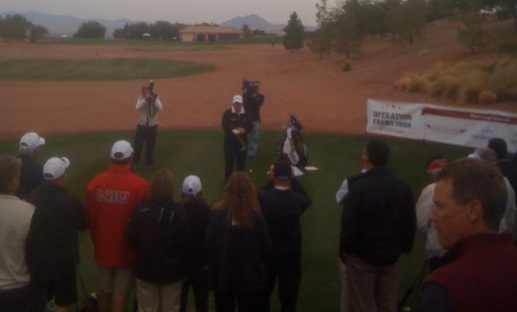