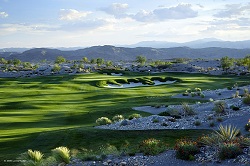 Las Vegas, Nevada (November 19, 2011)–It hit the golf scene hard when it opened. And now Jack Nicklaus' Coyote Springs Golf Club is offering free replays to those that play it. Coyote Springs was named to several "Best New Course" lists when it opened a few years ago. This beautiful Las Vegas Golf Region resort course is located about 50 minutes from the Las Vegas Strip. –By Brian Hurlburt.

Coyote Springs was named by the nation's top three consumer golf publications, Golf Digest, Golf Magazine and Travel+Leisure Golf, as one of the "Best New Courses of 2008." It marked the first time a Las Vegas area golf course had been named to all three Best New Courses lists. Accolades continued to pour in since then. Click now for an the official photo gallery. Rates as of this writing are available for under $100.

Nicklaus recently spoke to us about the course, saying among other things: "First of all, it is kind of in a unique area. It is about 45 minutes outside of Las Vegas and situated in an area where there really was nothing. Coyote Springs created its own area and identity. Similar to Lyle Anderson’s vision for Desert Mountain, when he took a remote piece of property north of Scottsdale and well north of Phoenix and created one of the world’s top golf clubs and communities, Harvey Whittemore had a vision for what he wanted to do with Coyote Springs. We were fortunate to be part of that vision. We took a piece of property that had a very nice setting, surrounded by mountains, and created some movement in it and created, what I think, is a very nice golf course."

From the official website: Coyote Springs is the first golf course in a planned series ofJack Nicklaus-designed courses that will flow throughout the Coyote Springs community. The course plays to a par 72 and ranges from 5,349 yards from the forward tees to 7,471 yards from the championship tees. Eleven lakes come into play on the golf course many consider to be one of Nicklaus' finest desert creations.