Las Vegas, Nevada (December 16, 2011)–Yes, that was Phil Mickelson parking his Chevy SUV in the Callaway Golf Center parking lot, then walking to his appearance at one of Vegas' most popular golf spots. No press agents, handlers, drivers, or anything. Just friendly Phil, parking next to regular Joe Vegas Golfer. Mickelson was in Las Vegas for a few days, along with some other big time Callaway Tour pros, filming commercials for the new RAZR driver and taking part in the Real Results project. Callaway provided the products; Vegas provided the "Wow Factor". –By Brian Hurlburt.

After walking in the first time, Mickelson went back and re-parked his truck, this time right in front of the Callaway golf shop. He then opened the back of the vehicle, slapped on his golf shoes and hat, and grabbed the magical and adjustable RAZR Fit driver from his bag before walking to one of the Callaway Golf Center practice tees. There waiting for him were Callaway golf gurus, cameras, and fans. They were there to see one of the best to ever play the game.

But the popular Callaway Golf Center was just one of several sites being used by Callaway for the filming of their 2012 advertising campaign. Among the items on the list to do was Mickelson hitting through the fire (click for video) of the Mirage volcano, have Alviro Quiros knock one 350+ yards over the Bellagio Fountains, and some other surprises that will be released next year.

“It's a commercial production for 2012 and whenever you look at sites you want a wow factor and if you can’t get a wow factor in Las Vegas then you’re doing something wrong," said Callaway Vice President of Sports Marketing Nick Raffaele. "With that being said, it's about trying to bring our products to life and trying to resonate the benefit to the consumer. With Callaway, we always feel like we have the best products. We’re at the top of the hot lists; we have the gold medals to prove it. We know we have better products but now how do we bring those to life and accentuate it? We have done that here by knocking a ball over the fountains and through the fire of the volcano. The whole motive is to prove we have the best products and we are going to show that in a big way."

Mickelson, who works with Las Vegas Golf Region resident Butch Harmon, settled in nicely on the Callaway tee, ripping a few drives before getting down to the business of promoting the new RAZR Fit. "The versatility of this driver is what I am really enjoying," said an unscripted Mickelson into the camera. " … the key to golf for me is getting the drivers and fairway woods, and irons to line up together; to have the same miss. So if I'm hitting good drives and then switch to my 5-iron I should hit a good 5-iron. If not, something is off."

While talking, Mickelson, on his own, quickly changed the settings on the new RAZR Fit driver without assistance from any of the tech guys standing by and listening. He made the point about how easy the club settings were to change and that practicing with the club over the last few months has him "excited about playing golf". Mickelson had a favorite club setting prior to the Callaway demonstration, but to the delight of those gathered, he experimented with different settings. After each swing he checked the fitting monitor and discussed how his spin rate and loft angle would change from shot to shot. He also mentioned that he can immediately tell if a club is an ounce off or a setting is different.

"Tied into the commercial shoot is that the players are going through the Real Results program and we are also out with consumers and are fitting them with the adjustable driver and showing them real results before and after," added Raffaele. "We are showing the consumer what we have already done with the Tour players. We want to show the everyday golfer that they can benefit from the same thing that we do for the pros."

Mickelson ended his day at Callaway–Las Vegas' most complete practice center that is located on the Las Vegas Strip and includes a two-tiered driving range and a lighted par 3 course–by signing autographs for everyone gathered. He then took off his golf shoes, threw his club and hat in the back of the truck, and drove himself down the Las Vegas Strip. 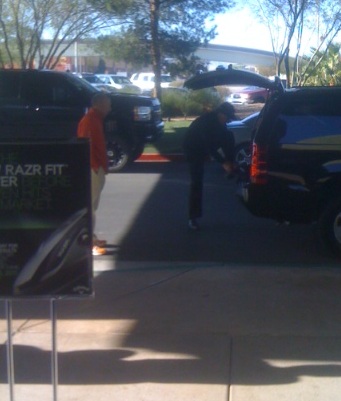 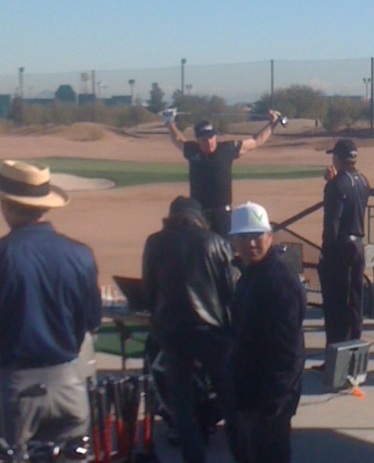