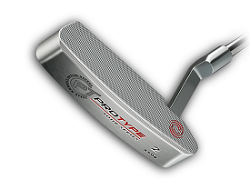 Las Vegas, Nevada (March 9, 2012)–Some names are synonomous with excellence. Rolex. Dom Perignon. Mercedes. Odyssey. And since this is a website about ALL things in the Las Vegas Golf Region, we are going to focus on that last name … Odyssey. Now is a good time to do so given the recent release of the Odyssey ProType Tour Series line of putters. This new line was created after feedback from hundreds of Tour professionals, and it is now available at Las Vegas Golf and Tennis locations in Las Vegas and the Callaway Golf Center. –By Brian Hurlburt

"When we set out to design the ProType putters, we decided on six shapes that were tour-proven—meaning not only have Tour pros used them, but they've won with them," said Austie Rollinson, Odyssey's Principal Designer via press release. "The second thing that influenced these designs is the feedback we got from tour players, which helped us make modifications to existing products and arrive at these new offerings. Their feedback led us to fine-tune the sound, include a deep mill pattern on the face, and design with thinner top lines and thicker faces. The clean look and one-piece construction was also something that players really liked and wanted to see in this type of product." Click now for the official Odyssey website for more ProType info.

Odyssey's ProType putters are available in six head shapes, each of which has delivered winning results on professional tours around the world. The putters are made from 1025 Carbon Steel, producing similar performance characteristics to stainless steel, but with a softer feel. The face of each putter features a deeper, sharper milling pattern to increase interaction between the face and the ball for better feel, truer roll and more consistency.

"We have been personalizing putters with our after market grips for a while now and the putter is such a personal piece of equipment for golfers, specifically tour players," Rollinson said. "If there's any club in the bag that has a personality it would be the putter; it's the life of the party. Go out on tour and you'll see that no two putters are exactly the same. So we wanted to be able to bring that personalization to consumers, at least in the grip and paint fill."