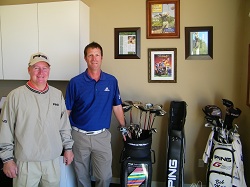 Las Vegas, Nevada (April 14, 2012)–PGA Tour pros Bob May and Jeff Gallagher are longtime residents of the Las Vegas Golf Region. They have become part of the fabric of the community. Now the duo is teaming up for the now open Bob May Golf Academy. The Academy is officially located at SilverStone Golf Club, but also serves other popular Las Vegas golf courses. Now Las Vegas golfers of all ages can learn the game from two pros who have been there, done that. Visit the official Bob May Golf Academy website now. –By Brian Hurlburt. Follow @LVGolfInsider

May and Gallagher have a combined 45 years of playing experience on the PGA Tour, Nationwide Tour, European Tour, and other international tours. And May has a huge advantage when it comes to teaching juniors because he was one of the best juniors in California history. He set various records in the state as a youngster. Prior to Tiger Woods attempting to reach Jack Nicklaus' record of 18 majors, Woods set out to beat May's junior records.

May then went on to a PGA Tour career where he has earned more than $3.6 million during his career, and finished as a runner-up three times. One of those finishes was at the 2000 PGA Championship when May battled Woods stroke for stroke before losing in a playoff. But May's final three rounds of 66 on Friday, Saturday, and Sunday still ranks as some of the best golf ever played in a major.

As for Gallagher, he is a two-time champion on the Nationwide Tour, and also has played in more than 130 PGA Tour events, earning more than $800,000 in his career. One of his advantages as an instructor is that he comes from a very successful golf family, anchored by his father, Jim, a longtime teaching professional at Meshingomesia Country Club in Indiana. Jeff's brother, Jim, and sister, Jackie, also played professional golf. Jim won five times on the PGA Tour and now plays the Champions Tour. Jackie is a former LPGA Tour champion, making her and Jim only the second brother-sister combo to win on the PGA Tour and LPGA Tour.

Both May and Gallagher are dedicated to giving back to the game through the new Academy, and are looking forward to helping all levels of golfers in the Las Vegas area. And they will also welcome those visiting Las Vegas at the school. In fact, for those wishing to spend a day reliving the magic of the 2000 PGA Championship, May offers a special Ultimate Package where you can play 18 holes and spend other time on and off the course with him.

The Academy's main building is on the range at SilverStone Golf Club, but May and Gallagher, along with teaching professional Michael Fabian, also serve Badlands Golf Club and Primm Valley Golf Club due to their association with Par 4 Golf Management. The SilverStone buidling is state of the art with indoor hitting bays (air conditioned and heated), video equipment, practice area, and is decorated with memorabilia from their playing days.

"My philosophy is simple: swing the handle, not the clubhead," says May, who played collegiately at powerhouse Oklahoma State. As for Gallagher, he will preach what his father taught he and his siblings: "The basic fundamentals are where it all starts," says Gallagher.

May also says that other area teaching professionals have already reached out to he and Gallagher so they can pass along actual playing experience to younger players. "To his credit, a local pro suggested one of his students come work with us," says May. "He told the player, 'I can't tell you what it's like to walk down the fairway of a PGA Tour event, but they can.' That is something that we can bring to our instruction that is invaluable to all players. We can teach, from our experience, what it takes to perform under pressure, whether it be an major amateur event or a member-guest or a round with your buddies." Click now to view the lesson packages available at the Academy. May and Gallagher are offering individual lessons starting for only $75 per hour ($60 for juniors) and a special $35 tuneup..

The two also say they will spend time on the course with players because that is truly where the game is learned. "Creativity is feel," says May. "You have to have imagination to play this game." 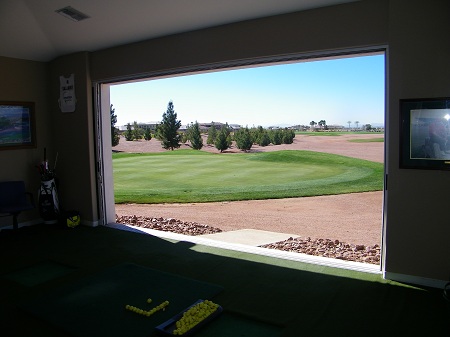 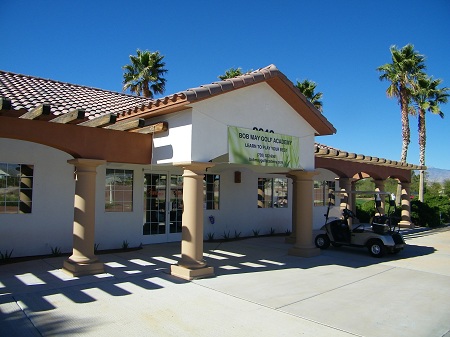 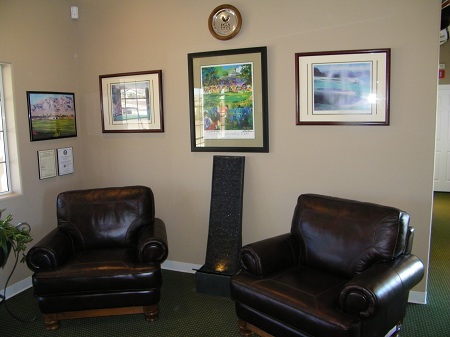