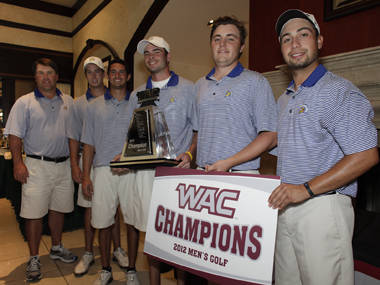 The Spartans carded a three-round total of 876 to win by six strokes over New Mexico State. Myers, the San Jose State senior, won the individual title after scoring a birdie on the first sudden death playoff hole to defeat New Mexico State's Justin Shin. Myers shot a 1-under par 71 in the final round to card a 5-under 211 for the three rounds. Idaho's Sean McMullen was third at even par (216).

Las Vegas golf course Rio Secco is a resort course owned and operated by Caesars Entertainment. You, too, can play where the best college golfers in the country tee it up. Click now to view the official website of Rio Secco Golf Club.

"We had a better level of focus," said San Jose State head coach John Kennaday in a release on the school's official website. "We just played the golf course. We fought hard and we won.It took a whole team effort. This is a very tough golf course. The 11th through 16th holes can really come back and bite you hard."

"We played #1 which was 406 yards down wind," Myers told the website about the playoff. "I hit my driver to the back of the green, 30 feet away from the hole. My (first) putt went 4-feet past. Then, I hit it straight up hill for a birdie."