Las Vegas, Nevada (Updaed July 22, 2012)–Adam Scott failed in bid to become the first male golfer from Las Vegas to win a Major, losing the final round. Forgive us for taking some liberty with the name of the course where The British Open Championship is being played this week. With a true Vegas Golfer leading after round one, and Royal Links Golf Club in Las Vegas featuring Royal Lytham's 10th hole, we said what the heck. Adam Scott played college golf at UNLV and fired a 64 in round one. –By Brian Hurlburt, Follow us on Twitter @LVGolfInsider

"Very pleased with the start, obviously," Scott told the media following his round. "It's nice just to take advantage of the calm conditions today.  It was surprising but very pleasing to go out and play some solid golf.  It's what I haven't done the first rounds of the majors this year, and that was my goal here, really, starting the week was to play today like it was Sunday and there was no tomorrow. I did a good job of that, and now I've got my work cut out for me the next couple of days to keep myself in a similar kind of position."

Royal Links Golf Club is a Las Vegas golf favorite and features replica holes from the courses used during the Open Championship. In fact, the first hole at Royal Links Golf Club is patterned after the 10th at Royal Lytham. Click now to view the 10th at Lytham from the official Open Championship website course guide. And click now to view the first hole flyover from RoyalLinksGolfClub.com.

Official opening description: "Royal Links was built to honor the rich history and tradition of the game of golf. Designed by Dye International, this links-style course features holes inspired by eleven different British Open rotation courses, including the “Road Hole” and “Hell Bunker” from the old course at St. Andrews and the “Postage Stamp” from Royal Troon. Other courses in the loop include Carnoustie, Turnberry, Royal Liverpool, Prestwick, Royal Lytham, Muirfield and Royal Birkdale."

One major difference between Royal Links in Las Vegas and Royal Lytham across the pond is that you can take a Par Mate on your Vegas Open Championship journey. The Par Mates are beautiful female caddies available for hire. Click now to meet a Royal Links Par Mate. Advantage Las Vegas … sorry Royal Lytham. (Adam Scott quote couresy ASAPSports.com) 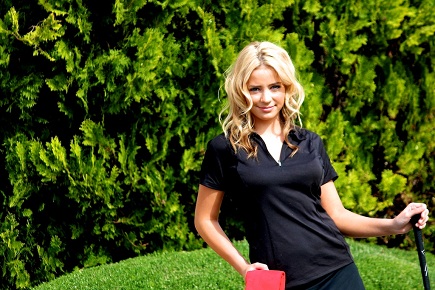