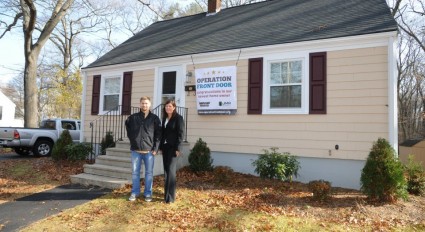 Las Vegas, Nevada (August 30-31, 2012)–Butch Harmon operates his School of Golf at Las Vegas' Rio Secco Golf Club, and annually he hosts several outings for United States military members. Many go under the radar, Butch just doing the right thing by bringing some joy to these true American Heroes. And this Veterans Day 2012, Harmon will host the JMA and Operation Front Door Classic benefiting the Harmon's Heroes Foundation. The event is November 10-11, 2012, and will be played at Bali Hai Golf Club. — By Brian Hurlburt

Operation Front Door is a housing grant initiative that was developed and implemented to assist OEF and OIF combat-wounded and disability-rated warriors secure and sustain home ownership. The inaugural golf classic in 2011 raised nearly $200,000 for the cause.

The 2012 event combines hospitality and rooms at the Green Valley Ranch Resort with golf at Bali Hai Golf Club located on the Las Vegas Strip. Also included in your team purchase or sponsorship are invites to the welcome cocktail party, a chance to meet and greet the military heroes and Butch Harmon, and other special gifts.

The Harmon's Heroes foundation was established by Butch Harmon, President of the Butch Harmon School of Golf and Golf Digest's Number One Golf Instructor for 12 years running. The Harmon's Heroes Foundation develops, operates and supports a series of golf-based events that encourage wellness and quality of life for today's military personnel.

Operation Front Door was created by Las Vegas businessman John Manni and his wife, Kathi. They give their time and money to make the tournament and foundation have a lasting and positive impact. "Many of the troops are classified as disabled—but do not tell them that," says Manni. "These young men and women do not want to be treated any differently. They are not bitter, they do not complain, they just want a chance and need a little help as they work to resume a normal life." Manni is the founder of JMA Services, the title sponsor of the tournament.

Operation Front Door has already awarded homes to the military including to Kenneth Butler, SSG, U.S. Army (retired). Kenny is from Massachusetts. He was deployed four times, once to Afghanistan and three times to Iraq. On his last deployment in Iraq in 2007 he was severely wounded by an EFP southeast of Baghdad. He lost his right arm and underwent extensive surgeries as well as intensive rehabilitation at Walter Reed Army Medical Center. He served proudly with the 82nd Airborne prior to being medically retired. He will graduate after three more semesters and plans to teach high school history.