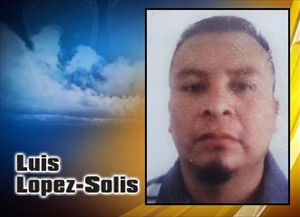 Las Vegas, Nevada (September 16, 2012)–The Las Vegas Golf Region has been hit with a few major rain storms this monsoon season, and this past week major flooding caused the death of Luis Lopez-Solis, a maintenance worker at Desert Rose Golf Club. Lopez was working on a backhoe when rising waters swept him away. A search ensued and his body was found two days later. At first it was reported that Calletano Lopez was missing but Metro Police said that was an alias. –Press Reports. Photo: MyNews3.

Lopez-Solis was said to be an employee of Par 3 Landscaping. KVVU Fox 5 reported that he had a fiance who was six months pregnant. An account has been set up for those interested in donating in the memory of Lopez-Solis. Info: Account# 30105870, First Security Bank of Nevada, 10501 West Gowan Rd., Las Vegas, Nevada.

At the time he went missing, the Southern Nevada Golf Course Superintendents Association sent out a press release urging volunteers to come and assist in the search and rescue efforts.