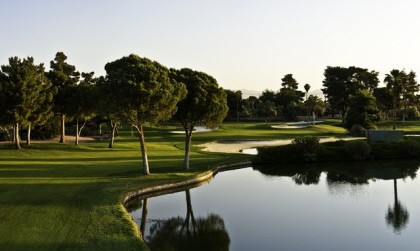 Las Vegas National Golf Club was the host course of the LPGA Championship, a major, from 1961-66, and also hosted the PGA Tour's Tournament of Champions in 1967 and 1968. The PGA Tour's Sahara Invitational was played over three decades in the fifties, sixties and seventies. Back then the course was known as The Stardust Country Club and Sahara National. And in 1996, the PGA Tour returned to Las Vegas National–then called Las Vegas Hilton Country Club–and a guy named Tiger Woods shot 70 during his round at the course en route to earning his first win on the PGA Tour (1996 Las Vegas Invitational, won in a playoff against Tiger Woods, and played on three Vegas courses).

In addition to being the home of many professional tournaments, the course was a hang out spot for celebrities including Dean Martin, Sammy Davis, Jr. and Frank Sinatra, among others. They played golf and hung out in the clubhouse in the evenings. Now golfers can grab a drink or some food in the Rat Pack Bar and Grille.