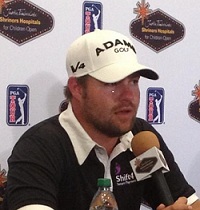 Las Vegas, Nevada (October 4, 2012)–It is believed that for the first time in Las Vegas golf history, three PGA Tour players with deep ties to Vegas were paired together in the hometown event. That was the case when Ryan Moore, Nick Watney, and Charley Hoffman stepped to the tee box at around 7:30 AM Las Vegas time. More history was made when Moore put together a round of 61, tieing the course record, and giving him the lead at the Justin Timberlake Shriners Hospitals for Children Open.–By Brian Hurlburt Follow @LVGolfInsider.

"I had no idea that was the course record, so that's nice," Moore said minutes after birdieing his final hole of the day, the par 5, 9th hole at TPC Summerlin. "I've just been playing good, solid golf lately. I just kind of keep hitting the ball solid and giving myself opportunities. On a golf course like this I'm probably more comfortable. I've played it more this year than any other coming into it. So just one of those nice days. I got off to a great start. I was 7‑under on the front nine and just kind of cruised the next nine. Made bogey there on my 17th hole, No. 8, which I wasn't too happy about, but it was great to bounce back with a birdie on the 9th hole." FULL LEADERBOARD.

Moore and Hoffman are former UNLV golfers, and Watney is a resident in the Las Vegas Golf Region. Moore obviously played the best but Watney put together a solid round of 66 and was in the top 10. Hoffman struggled during his round but a birdie on the final hole put him in red numbers at 70. A nice-sized gallery followed them and included Hall of Famer and UNLV Golf Coach Dwaine Knight and Las Vegas City Councilman Bob Coffin among others.

"I love playing with Charley and Nick; they're a couple of my favorite guys to play with," said Moore, who won the 1998 NCAA title while at UNLV. "It was a great pairing. Charley didn't have a great day, but Nick was playing some pretty solid golf right along with me. It was a fun day. We talked pretty much down every single fairway. It's a great event for me to have at the end of the year.  I'm enjoying it. We had quite a few people out there watching us, so it was good to get some sport early in the tournament. Like you said, the weekend picks up a little bit but Thursday/Friday is not too huge here. So it was nice to see some people out and definitely feel that support."

In 2011 Hunter Haas fired a 61 at TPC Summerlin making it two years in a row that a golfer recorded a 10-under par round. Moore also tied his own low round on the PGA Tour. He fired a 61 earlier this year at the HUMANA Challenge. "It didn't feel like a great round early," said Moore about the Vegas 61. "I did get off to a nice start. I birdied 11, 12, 13, and then eagled 15. But it wasn't like just perfect, you know, perfectly sharp, hitting it right where I'm trying to every single time. I just kind of was hitting good, solid shots and converting. You know, making my nice 10‑, 12‑footers" 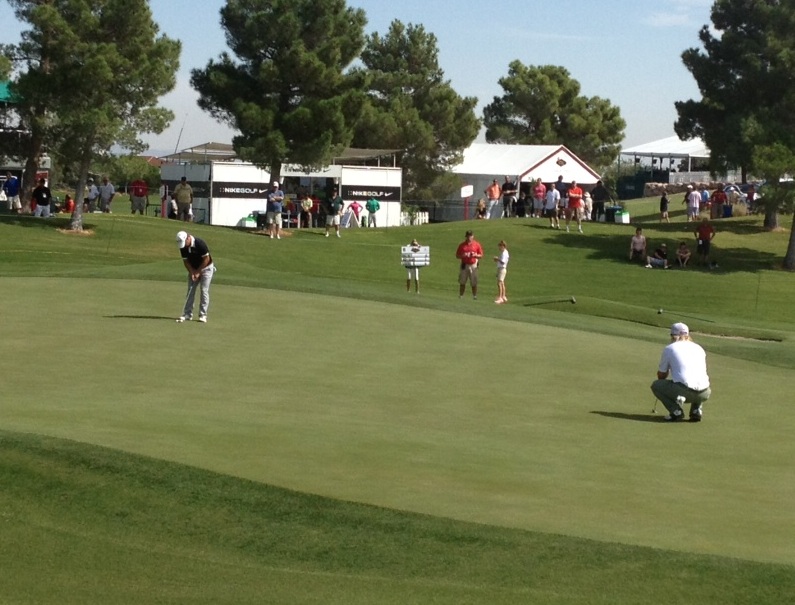