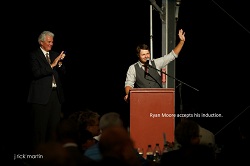 Las Vegas, Nevada (October 5, 2012)–Amazingly, after his round of 61 in the first round of the PGA Tour's Justin Timberlake Shriners Hospitals for Children Open, Ryan Moore admitted that the round didn't feel all that special–at least in the early going. But his mind started to change when he almost dunked his approach on 18 (his 9th hole), and made the turn after posting a 7-under par 29. The 61 was the latest in a list of areas where everything is coming together for the Las Vegas Golf Region resident.–By Brian Hurlburt, Follow @LVGolfInsider. Photo: MartinPhotoGroup.com.

About a month ago, Moore worked with his brother, Jeremy, to make some improvements in his putting. His brother noticed that Ryan wasn't lining up properly, and ever since that time spent on the putting green at the Deutsche Bank Championship, Moore has been one of the hottest players on the PGA Tour.

"It's nothing too crazy," Moore said about the putting alignment tweak. "I had my younger brother come out and help me in Boston, the Deutsche Bank tournament. I just wasn't feeling comfortable. My lines had gotten a little off. He caddied for me for years and always just had a good eye. He's watched me play a lot. So I just had him come out and look at my lines and see. My alignment was a little off mostly, which if you're starting with your alignment off, then you're compensating. My stroke doesn't really change that much, so if I get a little off my line I miss a lot of putts. So we've been working really hard the last few weeks getting my eyes back to seeing square at square. That allows me to just stroke it and feel confident and comfortable over it, and just hit putts and not be thinking about a stroke or putt or anything like that. We just kind of simplified it"

Since the tweak Moore has put together 3-straight top 10 finishes and is on his way to a fourth. Moore finished tied for 10th  in both the Deutsche Bank Championship and the BMW Championship, and added a 3rd-place finish at the TOUR Championship, the final stop of the PGA Tour's Fed Ex Cup Playoffs. Moore ended the year in 11th place in the Fed Ex Cup points standings.

Off the course, Moore and his wife, Nickie, are expecting their first child. She was a soccer star at UNLV at the same time Moore was playing golf for the Rebels. Also Moore was inducted into the Las Vegas Golf Hall of Fame on September 29 during a ceremony that kicked off PGA Tour week in Las Vegas. Moore won the 2004 NCAA title and has makes Las Vegas his home a majority of the time.