Las Vegas, Nevada (October 8, 2012)–REBEL WINS IN VEGAS! As news in the Las Vegas Golf Region, this is about as big as it gets. Ryan Moore became the first former UNLV Rebel to win the Las Vegas PGA Tour event. In the process he became the second Vegas resident in a row to earn the trophy of the Justin Timberlake Shriners Hospitals for Children Open. Moore hit, as he described it, one of the best shots of his career on the reachable par 5, 16th hole. –By Brian Hurlburt

"My caddie was pretty good there," said Moore about the decision to go for the green in two from 234 yards on the 16th hole. "We had our numbers. It was about 208 to the front and 234 to the pin. He just said a few times, 'That's the perfect club. Just hit it.' And it was. I had a 4‑iron, and I knew that was plenty to carry that water. At worst it would just chase through the green kind of where it got to on the back fringe. I just picked a good target and said, 'Fine, it's time to hit a golf shot.' I mean, there was no way around it. Any time you win, you come to some point where you just have to hit a shot and it all rides on that … I just knew that was my chance to make an eagle or a birdie to keep moving forward and to keep putting pressure … This (shot), because it resulted in winning a golf tournament, it's if not the best, pretty high up there."

Moore made birdie on the 16th after hitting the shot to about 25 feet and Brendean De Jonge, who he battled for the lead all day, made par. Moore then hit three more solid shots on the par 3 17th and the par 18th holes before two putting for the victory, the second win of his PGA Tour career. And like the shot, a win that ranks about as high as any victory that he will ever have.

"This was an amazing week. It really was. I mean, sometimes I'll have maybe my parents and one of my brothers out, and even both of my brothers, my older brother's family and his two children. You know, my sister came out this week. Just to have everybody here be involved and be able to all go out to dinner tonight and celebrate. And then on top of it, my wife's entire family that have adopted me pretty well or the last couple years. To have them all out and having a great time, it was a perfect week.

"We had a ton of people out there watching us. There were UNLV cheers and go Rebels all week, really. It was great walking up 18. They were all chanting, "Go Rebels." Like I said, this week has just been almost too perfect. It's one of those weeks that it all just kind of went my way. I was able to start out great and shoot 10‑under the first day, and that kind of put me into position so I could just play solid golf from that point on and still have a really good chance to win; that's what I did."

In 2011, Las Vegas Golf Region resident Kevin Na won the tournament. But Na moved to Las Vegas and didn't play at UNLV. Moore becomes the first former Rebel–he won the 2004 NCAA title while at UNLV–to win in Vegas. And he becomes the champion that will help lead the event into the FedEx Cup in 2013. Perfect. 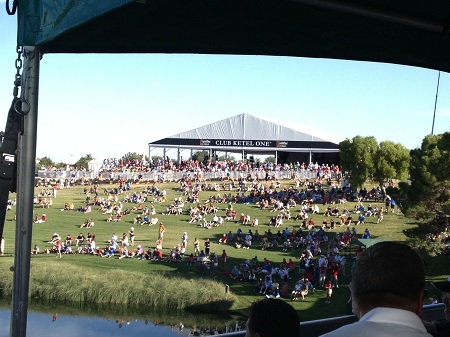