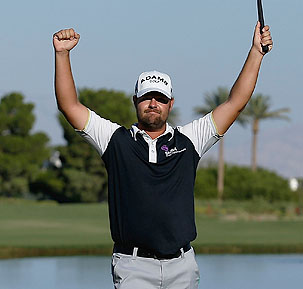 Las Vegas, Nevada (October 12, 2012)–There wasn't much to not like about the 2012 rendition of the Justin Timberlake Shriners Hospitals for Children Open. And with the successful 2012 showing, the event becoming a full FedEx Cup points tournament in 2013, and a new 5-year deal between the Shriners and the PGA Tour, the future is about as bright as it can be for pro golf in Las Vegas. –By Brian Hurlburt

The playing of the tournament in 2012 marked 30-straight years of professional golf in Las Vegas. And bigger crowds than previous years were apparent for everyday of the tournament and were bouyed by the contention of several PGA Tour pros with strong ties to Las Vegas. Also helping the turnout was the win by Las Vegas' Ryan Moore and constant effort to become a part of the community by the Shriners and tournament staff.

"We had a fantastic week," says Tournament Director Adam Sperling. "We asked the community to join us in the celebration as we crowned our 30th champion in the events storied history … and join us they did. Crowds were great all week, concessions were up more than 35% from the previous year, and we could not ask for a better champion as we embark on our entry into the FedExCup than former Runnin' Rebel, Ryan Moore."

There were no fewer than 14 ancillary events taking place in conjunction with the tournament, kicking off with the Las Vegas Golf Hall of Fame induction ceremony on September 29 and ending with the Tough Man Challenge on Monday October 8. The ToughMan Challenge allowed everyday golfers the opportunity to play the TPC Summerlin course under the same final round conditions as the professionals. And according to tournament officials more than 50 Las Vegas charitable organizations benefitted from the event.

Possibly the only negative note to the week was how celebrity tournament host Justin Timberlake and the Shriners ended their 5-year tournament partnership. The pop star will not be back in 2013. Timberlake, according to those close to the situation, never quite lived up to the expectations of what an A-list Hollywood star could bring to the tournament but there is no denying that his becoming involved five years ago gave the lackluster event an immediate boost in perception and reality.

His star-crossed time serving as the ambassador of golf in Las Vegas could be summed up in one two-hour stretch in 2011 when he made an appearance at the annual youth clinic hosted by The First Tee of Southern Nevada. Timberlake made brief remarks to the kids but then spent the next hour practicing his own short game a 100 yards away from the youth clinic. He made no effort to interact with the kids who were clamoring for his attention.

But later Timberlake did make time for an exclusive question and answer session with two First Tee of Southern Nevada junior reporters. It would have done Timberlake and tournament organizers much good if Timberlake had embraced such a level of access during his time in Vegas when he proved extremely difficult to get involved at a grass roots level.

In 2013 the Shriners move forward as the official host and sponsor of the tournament, and they have proven to be huge supporters of the PGA Tour and Las Vegas. And with full FedEx Cup points and an increased purse in 2013–the tournament will officially be a part of the 2014 FedEx Cup schedule because it falls early in the season–bigger names and more excitement is sure to follow. As they say, the best is yet to come…