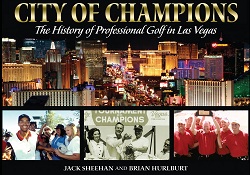 Las Vegas, Nevada (October 29, 2012)–City of Champions: the History of Professional Golf in Las Vegas is a recently-released coffee table book that features photos,  interviews with the likes of Jack Nicklaus and Tiger Woods, and more than 100 historic photos. The 160 pages detail more than 100 professional golf tournaments in Las Vegas dating back to the playing of the inaugural Tournament of Champions in 1953. Click now to order your official copy. –By Brian Hurlburt.

There have been huge golf moments in Las Vegas which captured international attention. The first Tournament of Champins was played in 1953 in Las Vegas, the first million-dollar purse in the history of the PGA Tour occurred in Las Vegas in 1983, and Tiger Woods won his first PGA Tour event in Las Vegas in 1996. In addition, the Las Vegas Golf Region is the home of many Tour pros and other big names from the golf world and City of Champions details many of them including Natalie Gulbis, Ryan Moore, and many more. Butch Harmon, voted the world's top golf teacher for 12 years in a row by his peers, has the following to say about golf in Las Vegas: "For me, Las Vegas is the perfect place to do what I do. Our golf schools are a personal experience, and with everything that Las Vegas offers, it provides a terrific backdrop for our School experience at Rio Secco. And Las Vegas has gone from just a casino/resort city to a true golf destination, and I am honored and happy to have been a part of that."

Recently Norm from the Las Vegas Review-Journal revealed a story about Jack Nicklaus which appears in the book. Nicklaus was in a car driven by former Desert Inn Country Club pro Bo Wininger and the two raced throough the streets of a young Las Vegas at more than 100 mph. Click now to read the article by Norm.

About the book: "Las Vegas has played host to more than 100 events on the PGA Tour, LPGA Tour, and Champions Tour. Jack Nicklaus has won six times in Las Vegas while Arnold Palmer hoisted the trophy three times here. Tiger Woods earned his first PGA Tour win on Las Vegas' fairways, and other legends such as Annika Sorenstam, Paul Azinger, Chi Chi Rodriguez, Greg Norman, Lorena Ochoa, Jim Furyk, Nancy Lopez, and many more have hit Vegas golf jackpots. Since the 1953 playing of the Tournament of Champions to the 2012 rendition of the Justin Timberlake Shriners Hospitals for Children Open, the biggest names in Hollywood and the sports world have been part of the scene. This publication reveals the on and off the course excitement surrounding a professional golf tournament played in Las Vegas, from Palmer teaching Nicklaus how to play craps to a battle of the sexes match for the ages. And everything in between."

The book was published by Stephens Press and co-authored by Brian Hurlburt and Jack Sheehan. Hurlburt is also the Founding editor of this website, GolfLasVegasNow.com. The book was created in conjunction with the Las Vegas Founders Club and the Las Vegas Convention and Visitors Authority. Click now to order City of Champions. Proceeds benefit The First Tee of Southern Nevada.