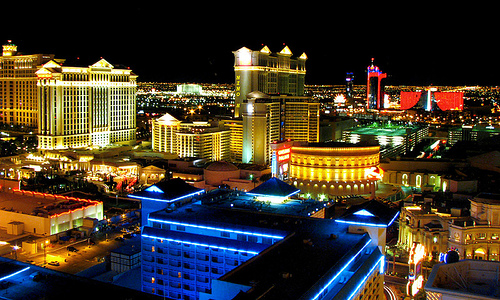 Las Vegas, Nevada (October 31, 2012)–Amateur golfers interested in playing golf in a challenging and fun golf tournament similar to major amateur tournaments held in other golf destinations should immediately mark down February 11-15, 2013, down on your calendar. The inaugural Las Vegas World Amateur will be held at several Las Vegas golf courses, and will combine the excitement of everthing that is Las Vegas with a compelling golf tournament. Details on Las Vegas golf packages with room, tee times in the tournament, parties, and more is available at VegasWorldAm.com now. –By Brian Hurlburt

“Las Vegas is, without a doubt, the best and most exciting city and golf destination in the world to host an event of this magnitude,” states Eric Yaillen, Executive Director of the Southern Nevada Golf Association, the organization staging the Las Vegas World Amateur. “There are similar events in other golf destinations, but the Las Vegas World Amateur will take amateur tournament golf to another level. On the course, the experience will be magnificent because of where golfers will be playing, and off the course the accommodations, parties, tee prizes, and everything else will be something that participants talk about and remember for years. The level of excitement is building, and golfers are already clamoring to be a part of a magical golf week in Las Vegas. All we can say is, ‘Welcome to Fabulous Las Vegas!”

The Las Vegas World Amateur is a V.I.P. golf tournament that is hosted by world class resorts and golf courses, and is open to a wide range of golfers. Caesars Entertainment is the resort and party partner for the tournament, with the opening reception taking place at the exclusive Gallery Nightclub at Planet Hollywood Resort and the awards dinner being held at Bally’s Las Vegas, one of Las Vegas’ biggest and most historic resorts. Official and exclusive hotel room rates will also be available to Las Vegas World Amateur participants.

The tournament is being organized by a group of individuals who have experience in the creation and operation of the Mesquite Amateur and the Myrtle Beach World Amateur, two of the largest tournaments in the world. "Our tournament team includes two people well known for staging these types of events," says Yaillen. "Ann Sunstrum created the Mesquite Amateur 10 years ago and Dave MacPherson worked as the Tournament Director for the Myrtle Beach World Amateur," noted Yaillen.  "With this experience, we're sure to create a memorable event for our competitors."

The Las Vegas World Amateur is open to all golfers – men, women, young and old – with a valid USGA Handicap Index (issued by a licensed club or federation). It features six competitive divisions, ranging from men and women 49 and under to the super seniors (70+). Within the divisions, golfers are flighted by closely grouped handicaps. The event features numerous flights and the winner of each advances to the Championship round, an 18-hole shootout that determines the World Champion. The tournament is scheduled to be played on approximately 10 different premiere Las Vegas area courses, and each flight plays a different course each day.