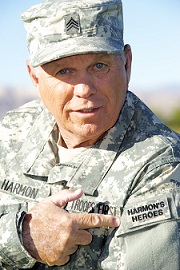 Las Vegas, Nevada (November 14, 2012)–The guy in the wheel chair said it matter of factly. "This invitation and now getting involved with golf has saved me. This is the first time in about six months I have been out of the house and it has motivated me to do more and continue living." The words were spoken by Daniel Meyer, a veteran of both Afghanistan and Iraq. He was one of about a dozen veterans involved with Harmon's Heroes, a life-changing event hosted by Las Vegas Golf Region resident Butch Harmon. Harmon, a veteran of Viet Nam, annually hosts wounded warriors at his school and is now working with Las Vegas businessman John Manni to purchase homes for deserving military families. Anecdotes like Meyer's abound. –By Brian Hurlburt, Photos J Rick Martin.

Meyer is 27 years old and served in the United States Air Force for nearly six years. Due to his service, he now suffers from a ter­mi­nal lung ill­ness called Bron­chi­oli­tis Oblit­er­ans. His illness was caused by exposure to Toxic Burn Pits. He is now without the use of his legs and confined to a wheel chair. His wife, Harmonie, is his daily caregiver. Meyer, a Las Vegas resident, was one of 11 wounded soldiers who took part in the Harmon's Heroes event which featured a VIP Golf School experience for the soldiers in addition to a golf tournament and other events that helped raise money and awareness for the cause. Recently the Foundation has started purchasing homes for deserving military families.

"It's an honor to host this event and to meet and get to know these true heroes," says the namesake, Butch Harmon. "As I always say, it's because of our military that we are able to live like we do. To help and give back is always a highlight of the year for me. Many of us don't realize the hardships that these soldiers face once they return from duty, and for us to help and now work with some to purcase homes is a humbling experience."

Harmon and his team hosted the soldiers at the Harmon School of Golf and offerred lessons and tips. The soldiers also played at Rio Secco Golf Club and Cascata, two Las Vegas golf courses operated by Caesars Entertainment. They are also the home courses for the Butch Harmon School of Golf. In addition, Titleist donated complete sets of golf clubs to each. And Manni and his company, JMA Services, were the title sponsor of the event and John, and his wife, Kathy, are part of the Foundation. The staff at Caesars Golf–headed by Vice President Eric Dutt–was also deeply involved.

During the week, Meyer was taught the swing by Harmon and  staff teaching pro Vic Wilk, and went from never hitting a golf ball to landing a shot on the green of the par 3, 16th hole at Bali Hai Golf Club just two days later. The tournament was played on Veterans Day at the course which is operated by Walters Golf. A huge roar from the attendees hit a crescendo as Meyer's ball landed softly and about 15 feet from the pin. The smile on Meyer's face said it all.

The Toxic Burn Pits that caused Meyer's illness are pretty much what they sound like. The open-air pits are located in military zones, and are where everything from furniture to human waste is dumped and then burned. Huge plumes of smoke billow from the huge holes, raining brutal air conditions and remnants down on a large area. Many times little precaution was taken, and soldiers and others were negatively impacted by the "toxic" fallout which causes a variety of life-altering and potentially deadly illnesses.

A recent military report detailed the maladies that the waste can cause. The report stated that exposure to the pits and fallout can be responsible for “reduced lung function or exacerbated chronic bronchitis, chronic obstructive pulmonary disease (COPD), asthma, atherosclerosis, or other cardiopulmonary diseases.” From this, Meyer suffers.

And in his words and of experts, none of it had to happen. It could have easily been avoided but wasn't, and now a young married couple deals with the ramifications on a daily basis. Legislation is currently being implemented to help document those affected  by exposure and to also help prevent it from happening in the future.

Daniel and Harmonie met in early February of 2009. Shortly after their first date, Meyer was told he would be deploying to Afghanistan in two weeks. By the time Meyer walked the tarmac at Nellis to board his plane, he was a newlywed with a vision and a plan of a long life together with his new bride following his tour of duty. It was a whirlwind romance.

Meyer returned months later from Afghanastan having lost 30 pounds. He felt tired and weary after the long trip home; he had never felt so fatigued. After many medical appointments and less than positive treatment, Meyer was diagnosed with the illness in Februaty 2011, just two years after meeting his "Harmonie." On October 1, 2011, Meyer was hon­or­ably and med­ically retired as a Staff Sergeant, E-5.

These days Harmonie cares for Meyer, and the two manage as best they can. Days are hard and Meyer tries to stay positive and motivated. Harmon's Heroes provided a spark and a new hobby to take his mind off his situation. Golf can't solve his medical problems, but can play a role in making his days more enjoyable. As it can with the other true heroes who took part in the event.

Please take time to learn more about Meyer via his official blog. And also become involved in Harmon's Heroes by clicking to the official Harmon's Heroes website. And thank you to all who serve America around the globe.