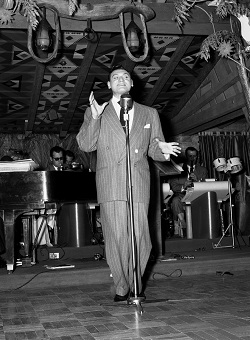 Las Vegas, Nevada (UPDATED December 31, 2012)–Las Vegas has played host to more than 100 PGA Tour, Champions Tour, and LPGA Tour events over the years. And possibly the most memorable were the 16 Tournament of Champions events that were played in Las Vegas from 1953-1968. These days the event is played in Hawaii in January and known as the Hyundai Tournament of Champions, but it all started in Vegas six decades ago. Vegas champions included Jack Nicklaus, Arnold Palmer, Sam Snead, and Gene Littler. Mewan Gene won in Las Vegas three times in a row (1955-57). In the process, Littler earned singer Frankie Laine big money through the off-the-course Calcutta betting. –By Brian Hurlburt. Quotes from City of Champions: the History of Professional Golf in Las Vegas. Photo Las Vegas News Bureau. Follow @LVGolfInsider.

Back in those days, the biggest names in the Las Vegas business, celebrity, hotel, and golf worlds organized the Tournament of Champions. And the event attracted the Hollywood elite including Bob Hope, Dean Martin, Walter Winchell, Laine, and many more. The highlight of the week was the Calcutta–just like the ones being played in private clubs around the world today–which had more action and money on the line than the purse for the pros. The event was played at the Desert Inn Golf Club and the Stardust Country Club (now Las Vegas National Golf Club, a Las Vegas resort course located minutes from the Las Vegas Strip).

Laine lucked into purchasing Littler, who was a rookie in 1955 when he came to Vegas. Las Vegas businessman Irwin Molasky–one of the founders of the Tournament of Champions–picks up the story from there. "One of the big things that they did was have a Calcutta," remembers Molasky, who built the Stardust Country Club and brought the Las Vegas Country Club to prominence along with partners Allard Roen (Tournament of Champions Chairman for 38 years), Moe Dalitz, and Merv Adelson. "Don’t forget, this is a gambling town, and in those years nobody overtly bet on the golf course. I mean, all the players bet themselves, but there wasn’t any professional gaming around or prices on players or anything …

"The Calcutta was a very integral part of this tournament. It’s what made it different from the other tournaments on the golf tour. To kick it off, they held a gala affair the night before the tournament. At that time, very few people knew what a Calcutta even was … Frankie Laine, the singer, was playing at the DI during the tournament in 1955. He was famous for a song called “Mule Train” and a few others. He didn’t know anything about golf, and he didn’t know one player from another, but he was auctioning off Gene Littler. And somebody bid 10 thousand, 15 thousand, but Laine wasn’t satisfied with that, and attempted to get the bidding up. So he personally bid 20 thousand or something like that. But they didn’t get any more bids, and he turned white as a ghost, because, I mean, that was big money for him in those days, even as an entertainer.

"He didn’t want to buy Littler, so he kept on begging for more bids. But he got stuck with him. Laine followed him the whole 72 holes and Gene won, and Laine won a huge amount. And so the second year, he was forced to bid on him again. And, again, he didn’t want to win the auction for Littler. But he was forced to really bid big, and he got him for maybe 35 thousand or whatever the number was, and the Calcutta pool was much higher and he won it the second year! The third year he knew he had to bid, so they pushed him up, and Littler won it for the 3rd year in a row! So Frankie Laine in those three years won a huge amount of money."