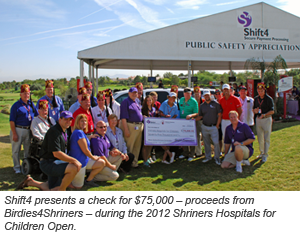 Las Vegas, Nevada (Janaury 6, 2013)–Las Vegas Golf Region PGA Tour stars Ryan Moore and Scott Piercy both enjoyed breakout seasons in 2012. Piercy won the Canadian Open while Moore won Las Vegas' hometown event, the Shriners Hospitals for Children Open. But possibly their biggest win was helping to raise $75,000 for the Shriners via the Birdies4Shriners campaign created by Las Vegas company Shift4. And the good news is that the Birdies4Shriners returns again in 2013. The campaign entices fans to sign up and pledge a certain dollar amount for birdies, eagles, and in some cases, holes-in-one, made by Piercy and/or Moore. Click now to sign up and become a part of Birdies4Shriners. –By Brian Hurlburt.

Birdies4Shriners tracks the play of PGA TOUR professionals Ryan Moore and Scott Piercy (both sponsored by Shift4) and allows donors to pledge a specific amount for each shot under par they make during the season. Shift4 adds to those donations with a generous contribution of their own: $100 for each birdie, $500 for each eagle, and $1,000 for each ace.

"After the great success we saw last year – culminating with us presenting Shriners Hospitals with a check for $75,000 – we are very excited to bring this campaign back and to get the public more involved and see how great a difference we can make this year," said Shift4 CEO Dave Oder in a statement. Founded in Las Vegas in 1994, Shift4 Corporation is the world's largest independent payment gateway, serving more than 20,000 clients in several industries, including Hospitality, Retail, Food & Beverage, Mail/Telephone Order, and e-Commerce.

The campaign is scheduled to kick off this week with the Hyundai Tournament of Champions in Hawaii, which both Moore and Piercy qualified for by winning PGA events in 2012, and it continues through the end of the 2013 Shriners Hospitals for Children Open (October 20), at which point a check will be presented reflecting the full donation amount. Every dollar donated will go directly to the Shriners, with Shift4 providing the online payment processing services free of charge.