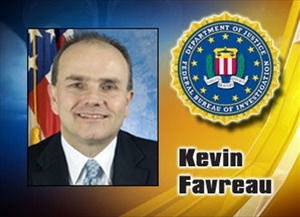 Las Vegas, Nevada (January 16, 2013)–There's a new sheriff, er, FBI Special Agent in Charge, in the Las Vegas Golf Region, and his name is Kevin Favreau. Yes, the man who once protected these United States from terrorism (he was credited with the vision that changed the way the FBI operates post 9/11) is now the Executive Director of The First Tee of Southern Nevada. And, no, hell hath not frozen over. –By Brian Hurlburt

"A lot of colleagues and friends have asked me, ‘Why?’. But it’s really an easy answer,” said Favreau in the official press release, which was crafted by this writer. “The First Tee of Southern Nevada is an awesome program that instills life skills and core values to our youth through the great game of golf. Similar to how golfers need the fundamental of proper alignment to hit fairways and greens, the First Tee programs help to align our kids who participate with the fundamentals of life. Plus, many of the core values the First Tee teaches are the same core values of the FBI – respect, integrity, responsibility – so I was drawn to the program because of its great mission. And the fact that I love golf didn't hurt either. For 30 years I have seen some of the negatives in life by nature of protecting our country; for the next 30 I am looking forward to seeing the good and making a positive impact on the kids of Southern Nevada. I also look forward to working closely with the other leading golf organizations to strengthen junior golf in Southern Nevada so that we increase retention of our kids’ lifelong involvement in the game, and give those kids with enhanced skills the opportunity to compete for college scholarships down the road."

Favreau and his wife, Cindy, are members of TPC Summerlin. And Kevin, who officially retired January 3, is already on the job, meeting kids and shaking hands with members of the Las Vegas golf community. He believes his ability to listen and form mutually beneficial partnerships will bring much success to The First Tee of Southern Nevada The organization introduces the best in life to kids through the game of golf. The board is thrilled to have such a professional join the team.

"Kevin's acceptance of the position as Executive Director of The First Tee of Southern Nevada is not only a transformative moment for our program, but for the youth in Southern Nevada and our overall community,” said Steve McCracken, Board of Directors President for The First Tee of Southern Nevada. “Kevin could have pursued many lucrative opportunities following his distinguished career, but he and his wife, Cyndi, have decided to invest in and give back to this community using golf and The First Tee life skills and core values as the vehicle. Kevin is a natural leader and our Board of Directors couldn't be more excited to have him guide our organization."

The First Tee of Southern Nevada is a leading youth organization that enriches lives and develops better citizens, ensures that participants learn the fundamentals of golf and its inherent values by providing accessible and affordable golf experiences including the life skills curriculum-based “Golf Fore Kids” development program, the “SNJGA Tour” competitive tournament program, and the “Driving the Dream” Scholarship program for higher education. The core values instilled by the organization in youth are Honesty, Integrity, Sportsmanship, Respect, Confidence, Responsibility, Perseverance, Courtesy and Judgment.

Kevin Favreau was named special agent in charge of the FBI's Las Vegas Division in December of 2009. Mr. Favreau had previously been appointed assistant director of the Directorate of Intelligence in April 2008. Prior to that, he served as deputy assistant director for Operations Support in the Counterintelligence Division at FBI Headquarters. He entered on duty in the FBI in October 1983 as a support employee in the Boston Division and later served as an intelligence information system analyst. In August 1988, he was selected as a special agent. Upon completion of training at the FBI Academy in Quantico, Virginia, he was assigned to the Pittsburgh Division, where for the next eight years he primarily worked counterespionage, counterintelligence, and counterterrorism matters as a case agent. Among other key roles, from August 2005 until June 2006, he served as chief of the newly-created Counterintelligence Strategy and Domain Section at FBI Headquarters. In this position, he coordinated all FBI counterintelligence outreach to the U.S. Intelligence Community, academia, and the private sector, which included the creation and oversight of the FBI’s Business Alliance program, the National Security Higher Education Advisory Board, and the Critical National Asset identification process.

About The First Tee of Southern Nevada