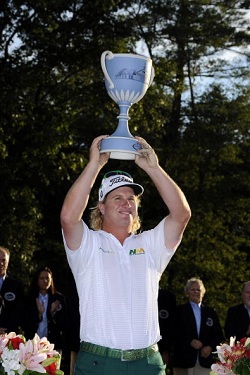 Las Vegas, Nevada (January 27, 2013)–Vegas is lucky to have certain residents. And Vegas is lucky to have Charley and Stacy Hoffman. Charley Hoffman is now a PGA Tour veteran and champion, and was a member of the 1998 UNLV Golf team which won the NCAA Championship. Charley made the decision to stay in Las Vegas following his time at UNLV, and the Hoffmans have dedicated themselves to giving back to this community and the San Diego area, where Charley was born and raised. This week, the Charley Hoffman Foundation held a fundraiser in conjunction with the Farmers Insurance Open and also went over the $1 million mark in total funds raised over the years. –By Brian Hurlburt.

“Going over the million dollar mark is pretty exciting,” Hoffman told Michael Bower of the Pomerdo News. “It is something that as a kid when I first started playing golf I never thought I would do. Now seeing it happen is a great feeling.” Hoffman also holds an event in Las Vegas during the Shriners Hospitals for Children Open which raises funds for Las Vegas charities.

Hoffman is one of about 30 Tour pros who have strong ties to Las Vegas, and he is one of the most philanthropic. Not only does Hoffman steer his Foundation, he plays in other charity events in the Las Vegas Golf Region. Hoffman lives in the same neighborhood as Bill Lunde, his childhood friend, who also is now a PGA Tour veteran.

“The foundation has really grown,” said Hoffman, who spends time in Mission Beach during the holidays and throughout the year. “It started helping kids in junior golf and has turned into something bigger and better.” Hoffman was hovering in the middle of the pack during the Farmers event. He has been battling a back injury for the last several months.

“I don’t go into tournaments just trying to make the cut,” Hoffman said. “My goal for the first couple of rounds is to put myself in contention to win it. It doesn’t matter if I am in New York, Los Angeles or my hometown of San Diego. I want to win.” Click now for the official leaderboard of the Farmers Insurance Open.