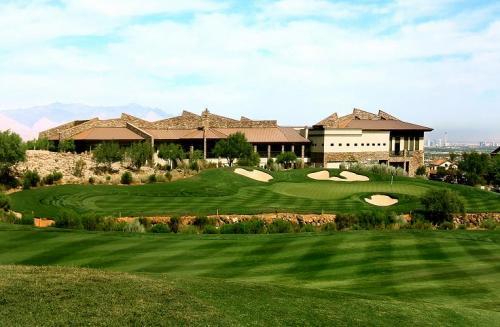 Las Vegas, Nevada (February 10, 2013)–As we continually chronicle here at GolfLasVegasNow.com, the Las Vegas Golf Region is the home to 25+ PGA Tour, LPGA Tour, Champions Tour, and Buy.com Tour pros who live here, played at UNLV, and/or grew up here before moving away. That number grows substantially when you factor in how many other golfers live here–or come here to play–who are chasing the dream of golf stardom on mini-tours. And now the founders of the Ultimate Golf Shootout series are giving those pros a place to play and the next event is scheduled for February 25-26, 2013, at DragonRidge Country Club. –By Brian Hurlburt

“Las Vegas is the number one destination in the world,” says Mitchell Bobrow, one of the Founders of the Ultimate Golf Shootout. “We have great golf courses and people obviously enjoy coming here. Creating a tournament in Las Vegas that features bigger cash payouts and top notch private golf courses was a natural."

The event at DragonRidge in February is the second event in the history of the series, and will feature a guaranteed at least a $4000 first-place prize. The inaugurual event was also played at DragonRidge in November, and was won Scott Smith who edged several accomplished and talented mini tour pros on the way to his victory. Brian Davis was second followed JP Brown, Drew Scott, and Matt Edwards. Entry fee for the February event is $500.

Fellow UGS Founder Mike Lewis says the new shootouts hold a huge advantage for players. “A distinction between The Ultimate Golf Shootout and many other golf tournaments around the country is we don’t require players to join our tour,” Lewis says.  “The cost of participation in professional mini-tours can be outrageous for the players. We believe it doesn’t have to be that way.”

Other mini tours can charge many thousands of dollars in membership fees on top of the individual entrey fees. Both Bobrow and Lewis believe that Las Vegas is fertile ground for the new tour because of the destination and the many quality golfers who live in the area.

“I think it is pretty obvious (how big golf can be)," says Bobrow. "The Waste Management Open in Phoenix recently set attendance records with over 500,000 spectators. Las Vegas needs to cultivate the golf professional at all levels, and that includes the mini-tour players. The mini tour guys would love to have a Las Vegas schedule. It certainly can’t hurt the local economy.”

The goal of the UGS series is to be formatted so that the winners will get the maximum payout of prize money plus Sponsor Bonuses. For more information, visit www.UltimateGolfShootout.com.

A brief recap of player bios from the inaugural Shootout: