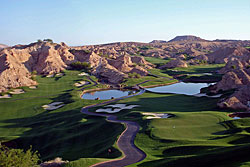 Las Vegas, Nevada (February 15, 2013)–The Mesquite Off-Road Weekend event February 21-24, 2013 in Mesquite, Nevada (77 miles north of Las Vegas) is shaping up nicely. And you can watch the racing and the world-famous Nitro Circus plus get in a round of golf at the Top 100 Wolf Creek Golf Club. The Off-Road portion of the event features trail rides that are open to the public, the Nitro EnduroCross races, a world-record jump attempt, and the Nitro Circus: Beyond Pro exhibition. –By Brian Hurlburt. Follow @LVGolfInsider

The Nitro Circus is best described as if “Evel Knievel and eight of his equally insane buddies had a television show where they tried to top each other’s stunts week after week.” Nitro Circus Founding Partner Gregg Godfrey—and the producer of the Nitro Circus motion picture and World Tour—has several insane tricks planned for his crew during the Nitro Circus “Beyond Pro” event which takes place at 6:30 PM on Saturday, February 23, 2013. Tickets start at $20 for kids 12 and under, $30 for adults, and special VIP tickets are available for $99 and include a very special demonstration—and Guinness Book of World Records jump attempt–on Friday night, February 22. All details: MesquiteOffRoad.com.

Wolf Creek Golf Club (Click for photo gallery) is a tantalizing layout that is annually included in the Top 100 lists of best golf courses by the major publications. And Wolf Creek with its fantasy-like holes, is kind of like Nitro Circus in the golf world. The Circus always goes big and you never know what will happen next. Wolf Creek, with its canyon holes, amazing terrain, and more, is a course unlike any other in the world. Click now for HOT MESQUITE TEE TIMES at Wolf Creek Golf Club. You can also secure Mesquite golf packages with the Eureka Resort at the official Wolf Creek website.

About Mesquite Off-Road Weekend: Sponsored by the Mesquite Resort Association in Mesquite, Nevada, this off-road event will include two days of riding, with 6 ATV/UTV, jeep and side X side rides, covering the most scenic trails in the Southwest Area and the Nitro Enduro Challenge Races taking place on 100 acres of rugged desert dirt next to the Eureka Casino Resort. It will be great fun for the whole family! There will be a vendor area with food, drink and entertainment in the PowerSports Plaza, a Guinness World Record Jump attempt, and plenty of activities to keep everyone entertained. The VIP party Friday night will be one not to miss. The highlight of weekend will be the “Beyond Pro” exhibition race by Nitro Circus. Mesquite is easy to get to and located just off Interstate 15. From I-15 North or South, take exit 122 on to Pioneer Blvd. Turn right on Mesa Blvd and park at the Eureka Casino Resort. Special hotel room deals and rates are available for Mesquite Off-Road fans and participants. For all information and to purchase tickets, visit www.MesquiteOffRoad.com . Follow on Twitter: @MesquiteOffRoadand Like on Facebook: https://www.facebook.com/mesquiteoffroadAdditional public information available at 702-345-4749 or Info@mesquiteoffroad.com