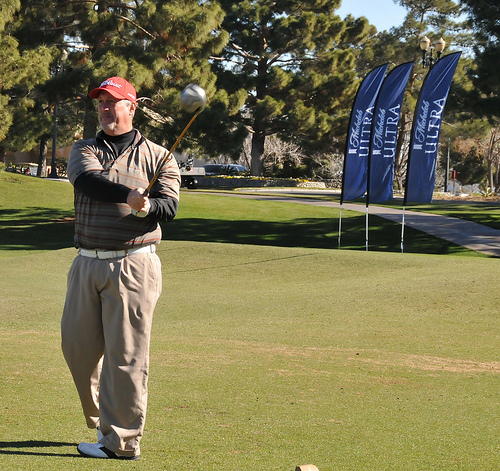 Las Vegas, Nevada (February 18, 2013)–The inaugural Vegas World Amateur golf tournament went off in true Vegas style last week. Competitors from all over the United States hit Las Vegas and some of the best Vegas courses for fun, competition, and true Vegas entertainment. One the of the lead sponsors, Michelob Ultra, flowed nicely, and other sponsors–including the Callaway Golf Center–stepped up to help pull off the first year event. Ken Kranz, from Wyoming, will forever be known as the first Grand Champion but all the golfers walked away ready for 2014. –By Brian Hurlburt

"Anytime you can come to Las Vegas and play golf, let alone be apart of an event like this, it's always good," said Blake Barnes of Texas who won the Luxor Flight (less than 49 years of age). "I thought the golf courses we played were great but one thing you have to do when you play in Las Vegas is hit good shots. With these courses, if you hit good shots you are rewarded and if you hit bad shots you are penalized. You have to be on your game to play here." Barnes, a 6.2 index, fired adjusted rounds of 77-67-77 to win.

The new event, patterned after similar amateur contests such as the Myrtle Beach World Amateur, Mesquite Amateur and Pacific Amateur, was administered by the Southern Nevada Golf Association and is the only event of its kind run by a bona fide regional Golf Association. Eric Yaillen, SNGA Executive Director said, "It was a team effort that included a number of sponsors that helped make this event extra special for our inaugural contestants including Michelob Ultra, Pukka, Callaway, Kusak Cut Glass, the Callaway Center, Golf Apparel Brands, Global Golf Post, and the Las Vegas Convention and Visitors Authority."

Dates for next year's championship have been set for February 10-14, 2014. For more information on the Las Vegas World Amateur, visit vegasworldamateur.com or Like Us on Facebook at facebook.com/LasVegasWorldAmateur. Click for the official Vegas World Am photo gallery.

The 72-hole flighted net event, was held over four courses including Las Vegas Paiute Golf Resort, Royal Links, TPC Las Vegas and Spanish Trail, and had competitors from across the U.S. and Canada. The Flight winners were determined following the first three rounds before the Grand Champion was awarded following the fourth and final round played at Spanish Trail Golf and Country Club.