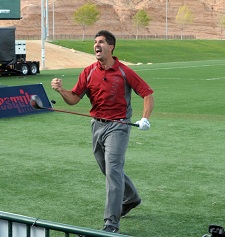 Las Vegas, Nevada (February 21, 2013)–For a time, it appeared that the marriage between Mesquite golf and the RE/MAX World Long Drive Finals was over. But due to a lot of working together, it appears the union is stronger than ever and a second honeymoon in Las Vegas will be taken as well. Las Vegas Golf Hall of Fame inductee and Long Drivers of America (LDA) Owner Art Sellinger made the announcement about returning to Mesquite and adding a Vegas element this week. —By Brian Hurlburt, PHOTO: Las Vegas News Bureau.

RE/MAX championship week, conducted for years in mid-to-late October, will move to September 18-27 in 2013 in Mesquite. World champions will be crowned in the Senior Division and five buy-in divisions during the 10-day festival. But the RE/MAX WLDC Open Division finals, a showdown among eight elite power golfers that will determine the longest hitter in the world, will take place on Wednesday, Oct. 30 in Las Vegas with live coverage by Golf Channel. The location for the this final event has yet to be confirmed.

"After many hours of discussion and give and take, LDA is delighted to be bringing the RE/MAX World Long Drive Championship back to Mesquite," Sellinger said, while praising Mesquite city officials, Golf Mesquite Nevada, and the Mesquite Resort Association. "For long drivers and long drive fans around the world, Mesquite is our Mecca. The championship grid at Mesquite Sports and Event Complex is our Pebble Beach, our Augusta National. It's where we all want to be. None of this would have been possible without the support and commitment of a consortium of local partners: Mesquite Resort Association, The City of Mesquite and Golf Mesquite Nevada. We were impressed by everyone's desire and determination to get this deal done. We received additional support from Las Vegas Convention Authority, as well."

Sellinger also announced that the LDA will stage three separate RE/MAX WLDC competitions in Mesquite in 2013: Desert Launch on March 1-3; RE/MAX regional finals in August 9-11 plus the championship over almost two weeks in September.

"LDA's new broadcast partnership with Golf Channel/NBC Sports will be the catalyst for showcasing Mesquite as never before across the globe," said Sellinger. "We have partnered with Golf Channel for four shows and more than 25 hours of programming throughout the final quarter of the year. Golf Channel delivers a tremendous demographic in terms of its viewership, as well as promotion, which will create additional value for Mesquite. Additionally, the RE/MAX WLDC Open Division finals will not only air live on Golf Channel, but a comprehensive season-in-review special will air on NBC, marking the first time ever the RE/MAX WLDC will be showcased on network television. This is a win-win for Mesquite and LDA. We couldn't be happier with the way things have turned out. Many citizens in Mesquite, including hundreds of dedicated tournament volunteers, stepped up and showed their support for LDA and the RE/MAX World Long Drive Championship. We're deeply gratified."

"To most golfers throughout the country, Mesquite, Nevada has been synonymous with the RE/MAX World Long Drive Championships since 1997," said Mesquite Mayor Mark Wier. "Our reputation as a golf destination has benefited from our partnership with the LDA and from the media coverage of the event at our world-class facility for the Long Drivers at the Mesquite Sports & Event Complex. We are enthusiastic about our three-year agreement with the LDA, and feel our new media partners, the Golf Channel and NBC Sports, will be a great benefit to the City and our local marketing partners, the Mesquite Resort Association and Golf Mesquite, Nevada."